Media Release: Expansion of forests in the European Arctic could result in release of carbon dioxide, says study 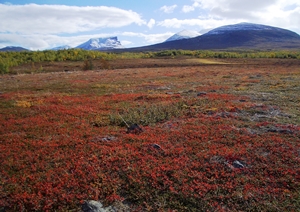 RESEARCH led by the University of Stirling and published in Nature Climate Change shows that rapid warming in the Arctic could have dramatic effects on the distribution of different ecosystems, and unexpected consequences for future climate change rates.

Begins a spokesperson: “The Arctic is getting greener as plant growth increases in response to a warmer climate.

“Since this greater plant growth means more carbon is stored in the increasing biomass, it has generally been believed that the ‘greening’ results in more carbon dioxide being absorbed from the atmosphere and that it therefore helps to reduce the rate of global warming.

“However, the Stirling-led research in Arctic Sweden shows that by stimulating decomposition rates in soils, the expansion of forest into tundra areas could, counterintuitively, result in a net release of carbon dioxide into the atmosphere.”

Professor Philip Wookey, who led the team conducting the research, said: “We compared carbon stocks between tundra heath and neighbouring birch forest and discovered that the two-fold greater carbon storage in plant biomass in the forest was more than outweighed by the smaller carbon stocks in forest soils.

“Using residual radiocarbon in these ecosystems, still present following the atmospheric atomic weapons testing of the 1950s and 60s, we were then able to demonstrate that birch trees appear to stimulate the decomposition of soil organic matter, contributing directly to reducing carbon storage in the soil.

“If birch woodlands expand onto tundra and peaty soils there may actually be a net release of carbon dioxide, thus accelerating the greenhouse effect.

“Our research demonstrates the key role that soils, and soil carbon, play in the global carbon cycle and therefore the climate system.”

The results of the study are thus in sharp contrast to the expectation that total carbon storage would increase with greater plant growth.

Instead, this study suggests that colonisation of the Arctic by productive, high-biomass plant communities may not always result in greater capture of carbon dioxide, but in net losses of carbon if there is decomposition of the large carbon stocks in Arctic soils.

Dr Iain Hartley, lead author of this work and now at the University of Exeter, observed: “Determining directly how carbon storage is changing in high-latitude ecosystems is very difficult because the majority of the carbon present is stored below ground in the soils.

“Our work indicates that greater plant biomass may not always translate into greater carbon storage at the ecosystem level.

“We need to better understand how the anticipated changes in the distribution of different plant communities in the Arctic will affect the decomposition of the large carbon stocks in tundra soils if we are to be able to predict how arctic greening will impact on carbon dioxide uptake or release in the future.”

The published article can be accessed here.