Media Release: Over 50 per cent of parents not shown how to correctly fit new child seats, says survey 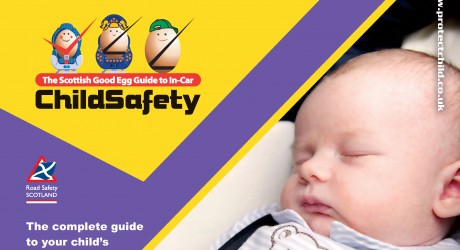 A NEW survey, conducted on behalf of the Scottish Good Egg In-Car Child Safety Initiative, has identified that, alarmingly, more than 50 per cent of parents in Scotland have not been shown how to correctly fit a new child car seat at the time of purchase and over ten per cent are not confident about their ability to fit one safely.

As a result, a new, FREE Good Egg Safety App has been developed which parents can download to help them make safer choices when buying and fitting seats.

Says a spokesperson: “This comes on the back of road casualty statistics published on Wednesday 20 June by Transport Scotland, which show that, in 2011, five children were killed while travelling as passengers.

“In 2011, the Good Egg campaign checked 1,827 seats in Scotland and found that 48 per cent of seats checked were either incorrectly-fitted or were incompatible with either the vehicle or the child, so it is still a problem.”

Director of Road Safety Scotland, Michael McDonnell, said: “I would strongly urge parents and carers to visit one of the in-car child safety clinics so they can be confident their children are safely restrained.”

Superintendent Alan Duncan, Lead Officer for the Association of Chief Police Officers in Scotland (ACPOS) National Campaigns added: “We are still finding children who are either not wearing seatbelts or who are restrained by unsuitable or incorrectly-fitted car seats. We fully support the Good Egg Campaign which helps to educate drivers about their responsibilities in relation to in-car child safety and provides sound practical advice to ensure children are kept safe whilst on the move.”

Running for over ten years, the Good Egg campaign is designed to ensure that babies and children are properly restrained while travelling in the car. The new 2012 campaign launches today (Monday 25 June) and 54 free in-car child safety clinics will be running across Scotland over the next three months.

These will offer support and reassurance for concerned parents and grandparents by providing experts who can check their child seats in the car.

The new Good Egg Safety App can be found on the new-look campaign website, www.protectchild.co.uk.

Good Egg Guides will also be freely available for parents from local road safety units and NHS Boards across Scotland and information leaflets and posters will be distributed to all doctors’ surgeries.

Sir Arnold Clark, chair and chief executive of The Arnold Clark Group, who has sponsored the Good Egg Campaign every year since its national launch in 2002, commented: “As a father, grandfather and great grandfather, I am very conscious that children must be kept safe when they are travelling in a car. It doesn’t take much time to check that a car seat is fitted properly and it will always be too late after a collision. I therefore urge parents to go to a Good Egg clinic to ensure that their child seats are fitted safely – it could ultimately save their child’s life.”

For more information about the 2012 Scottish Good Egg In-Car Child Safety Campaign, to join the Facebook page or to find out what’s happening in your area, go to www.protectchild.co.uk

Media are invited to a press launch with photo opportunities, which will take place on Monday 25th June, 10am – 11am at Asda, Govan, 500 Helen Street, Glasgow G51 3HR.

● 272 (54 per cent) had bought a new child seat from a retail shop as opposed to the Internet.

● One in ten of the 272 who had bought a new seat from a retail shop advised they were not confident about their ability to safely fit it.

3. In-car child safety clinics are local events held at supermarkets and retail parks across Scotland. Checking experts and local Road Safety Officers provide customers with child seat safety advice and offer the opportunity for to have their child seat checked.

These events usually run from approximately 10.00am until 3.00pm and a full list can be found on the campaign website, www.protectchild.co.uk