Media Release: EMERGE – a free National Theatre of Scotland event at the CCA 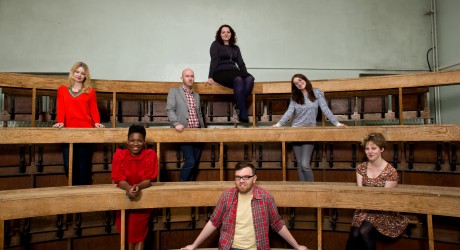 Seven up and coming National Theatre of Scotland artists will be showcasing their work at a FREE evening of performance at the CCA on 20th July from 6.30pm.

Each of the artists has won a place on the Company’s prestigious Bank of Scotland Emerge Programme, which annually supports emerging talent, enabling artists to develop their potential.

IN the first of a series of intimate events, these artists are willing to share their work at its earliest stage and or talk about their placements with the company.

EMERGE is curated by Caroline Newall, director of artistic development at the National Theatre of Scotland.

Audiences are invited to join the artistic development team and artists at the CCA, to sample the work, express their opinions and carry on the conversation in the bar afterwards.

The evening will feature new work performed in Scots, English and Gaelic.

Zona Morriaté, written and performed by Eilidh Daniels; a tale about show business, fame and delusion. Performed in Gaelic for a Gaelic and non-Gaelic speaking audience.

Hela, written, performed and introduced by Adura Onashile.  A solo work in progress exploring the extraordinary life of Henrietta Lacks, whose cells accidentally became one of the most important tools in medicine. Hela is pre-recorded and will be broadcast at the event.

A Story for a Storm, written and performed by Catriona Lexy Campbell in Gaelic. Handed down through generations of her family, Catriona tells the story of the day her great-great Aunt met the notorious murderer, Mac an t-Sronaich, on the moor on the Isle of Lewis. A story told by candlelight, a story for a storm.

Theology – a diptych of spoken word pieces by Martin O’Connor, celebrating the poetry of the Glaswegian dialect. At EMERGE, Martin will perform the first stage, A Govan of the Mind (inspired by Lawrence Ferlinghetti’s A Coney Island of the Mind). Martin has set out to discover an oral history of Glasgow using found language and spoken word to explore industry, Empire, unemployment and familial ties.

Rob Jones, and Debbie Hannan will talk about their experiences working behind the scenes on the sell-out National Theatre of Scotland hits, Macbeth and Enquirer, and Sarah MacDonald looks forward to working on Glasgow Girls, the musical, coming to the Citizens in the autumn.

“Bank of Scotland’s Emerge Programme at the National Theatre of Scotland is a vital organisational resource that helps us identify and nurture emerging and diversifying artists.

“We are committed to enabling a new generation of theatre-makers to become key players in Scotland’s successful cultural future. Our Pioneering Partnership with Bank of Scotland is spread across all aspects our company’s programme of work and empowers us to achieve greater experiences and opportunities for the people of Scotland.”

Susan Rice, managing director, Lloyds Banking Group Scotland, says: “Through Bank of Scotland’s Pioneering Partnership with the National Theatre of Scotland, we support the next generation of theatrical talent.

“We’re always excited when we meet one of these new directors or aspiring artists; for some, our support is the only way they can manage to continue learning and gaining experience.

“It’s truly gratifying to be part of their journey with this focus on emerging talent, which sits in the core of our relationship with the National Theatre of Scotland.”

1. The National Theatre of Scotland is supported by the Scottish Government. Since its launch in February 2006, the National Theatre of Scotland has been involved in creating 181 productions in 156 different locations. With no building of its own, the company takes theatre all over Scotland and beyond, working with existing and new venues and companies to create and tour theatre of the highest quality. It takes place in the great buildings of Scotland, but also in site-specific locations, airports and tower blocks, community halls and drill halls, ferries and forests. The company has performed to over 770,000 people, across three continents.

2. Bank of Scotland is a long-standing supporter of sports and the arts in Scotland. Through their sponsorships they aim to support emerging talent across Scotland. Bank of Scotland currently has partnerships with a wide range of Scottish sporting and cultural bodies including Imaginate, the Edinburgh International Festival, the Scottish Football Association and the Great Scottish Run. As part of the Lloyds Banking Group, Bank of Scotland is a Proud Partner for Scotland for the London 2012 Olympic and Paralympic Games. Their mission is to inspire and support young people, colleagues, communities and businesses across Scotland all the way to the London 2012 Olympic and Paralympic Games and beyond, through cultural and sporting activities.

3. The Emerge Programme represents one element of the National Theatre of Scotland and Bank of Scotlond’s Pioneering Partnership – a sponsorship connecting Bank of Scotland and the National Theatre of Scotland in a relationship across a wide range of National Theatre of Scotland programme elements over two years. The partnership offers geographic spread and reach across productions, initiatives, workshops and events particularly in the area of supporting creativity and emerging talent.  In Year 2(2012) the elements of Bank of Scotland Pioneering Partnership include support of An  Appointment with the Wicker Man  by Greg Hemphill and Donald McLeary; The Guid Sisters by Michel Tremblay in Scots translation by Bill Findlay and Martin Bowman – a co-production with the Royal Lyceum Theatre, Edinburgh; the small scale tour of The Monster in the Hall and Yellow Moon, by David Greig and directed by Guy Hollands and the Emerge Programme supporting flourishing artists and directors.

4.  We would like to make a request for your support: Corporate sponsorship of the National Theatre of Scotland is crucial to its future. As arts supporters yourselves we hope you will help us in maintaining this important portion of our income and healthy relationships with sponsors by mentioning them in your coverage. This makes a real difference to the National Theatre of Scotland. Mentions are counted and used as an evaluation of projects. Please credit our sponsors.