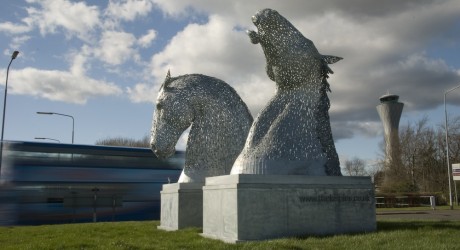 A MAJOR new Scottish public arts project is to be showcased to an international audience in Chicago – a year ahead of its unveiling in Falkirk.

Internationally-recognised artist, Andy Scott, has been commissioned to produce ‘The Kelpies’ as part of the £41 million Helix land transformation development and two, four-metre high models (Maquettes) of the finished 30-metre sculptures are set to make a significant impact at this year’s major Chicago Sculpture International Outdoor Exhibition.

Scott’s Maquettes are being shipped to America this week, having secured a unique invitation to be involved in the event that is widely regarded as one of the world’s foremost public art gatherings.

“What we are talking about here, is an extremely rare and exciting opportunity to showcase The Kelpies to the world in a high profile art exhibition in a city which has built an enviable reputation for public art by leading artists including Kapoor, Calder and Picasso,” said Helix Trust programme director, Mike King.

“The fact that Andy will be the only non-American artist exhibiting at the event is significant enough in itself, but add to that the huge opportunity to highlight the Helix project story to the highly influential American audience and you can see why we are thrilled to be involved.

“The Kelpies will be installed and open to the public within the new Helix parkscape in Falkirk in the summer of next year and this event will be one of many opportunities we will be taking to spread the story of their significance and relevance to Scotland between now and then.

“We’d like to thank Creative Scotland and VisitScotland for their support in making this happen.”

The exhibition of 60 sculptures will take place in the Grant and Lincoln Parks in Chicago and it is hoped the Maquettes of The Kelpies will occupy a prime position overlooking Lake Michigan in Grant Park, close to the Navy Pier tourist and leisure destination which attracts around nine million visitors a year.

“In addition, the fact that this year’s Ryder Cup takes place at the Medinah Country Club during the exhibition run will also allow us to involve the Maquettes in the Scotland-wide promotional activity happening around one of the sporting world’s highest profile events.

“With North American visitor numbers to Scotland up by 15 per cent from 2010 and the country remaining one of the five biggest overseas markets by spend we had to take advantage of this unique and timely opportunity.”

A combination of Andy Scott’s international profile and a Scottish Council for Development & Industry trade delegation to Chicago, led to the invitation to transport the Maquettes to America and Scott feels the opportunity is one ‘not to be missed’.

“Chicago’s fantastic reputation for public art excellence has been hard earned which means this event is really up there in terms of recognition by the artistic community and wider creative world,” said Andy.

“The heavy horse which is the inspiration for The Kelpies, played a hugely influential role in the progress of modern society. They were the powerhouse of the early industrial revolution, the tractors of early agriculture and, of course, the first source of locomotion for barges on the very canal which The Kelpies will inhabit.

“I see The Kelpies as a personification of that history, of the lost industries of Scotland, but I also see them as a symbol of modern Scotland – proud and majestic and that is the message I hope we can get across during our time in Chicago.”

“I will be working with the event organisers and the team at The Helix Trust to make this work for all involved and the rewards in terms of profile and exposure to the important American market could be hugely significant to the impact the Helix project will have on Falkirk and Scotland.

“The transportation of the Maquettes has been a considerable logistical challenge and I’d like to thank the event organisers in Chicago who have been immensely generous and hospitable with their time and energy.”

The Helix project is transforming land between Falkirk and Grangemouth into a vibrant new parkland set to become an international visitor attraction.

Key developments in phase one – opening 2013 – include a central park with its own enclosed lagoon and outdoor events space. There will also be a new canal link featuring the Kelpies® – two towering sculptures in the shape of horse’s heads.

The project, which is being driven by a partnership of Falkirk Council, British Waterways Scotland and Central Scotland Forest Trust through the Helix Trust, has been awarded £25 million by the Big Lottery Fund’s Living Landmarks programme.

For more information on the Kelpies and Andy Scott visit www.thekelpies.co.uk

MEDIA RELEASE posted by McGarvie Morrison Media. You too can post media releases (aka press releases) on allmediascotland.com. For more information, email here.