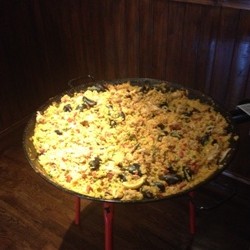 LOVERS of the Beautiful Game can get in the mood for watching the stars of the current European and World Champions Spain when they take on Japan at Hampden tomorrow (Thursday July 26th) with a taste of traditional Catalonian and Spanish-inspired cuisine at nearby La Vida Tapas Bar.

Manager, Patrick Stapleton, said: “Fresh from supporting Spain at Euro 2012, La Vida will be screening all Spain’s games at the London Olympics 2012 – and given our southside location – we’re the perfect place to pop in for a taste of Spanish cuisine before or after the game at Hampden.

“Spain are hot favourites to win an Olympic gold, which is no surprise given that their squad looks set to include David de Gea and Jordi Alba, who scored one of the winning Euro 2012 goals. And football fans can enjoy their latest games in style with our delicious range of meat, fish and vegetarian tapas or paella at La Vida. Viva Espana!”

From July 25 to August 3, Hampden Park, will play host to some of the world’s best men’s and women’s football teams. In addition to Japan, Spain will play Honduras and Morocco.

La Vida is located at 1534 Pollokshaws Road in Glasgow’s southside.