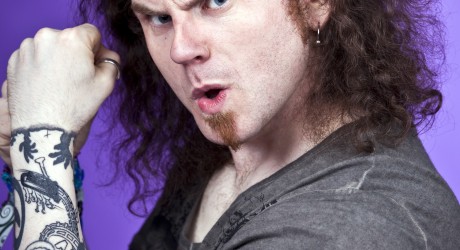 EVERY TATTOO tells a story… so what does your ink say about you?

Scottish comedian and actor, Billy Kirkwood, invites audiences to share, show and chat about their tattoos in Show Me Your Tattoo, which returns to Edinburgh for another run down the hilarious highway of human graffiti.

Updated for 2012 and part of the inaugural Scottish Comedy Festival, the 2011 smash hit sell-out show takes a look at the weird and wonderful world of body art: from the sublime to the ridiculous; the silly to the sexy; the brilliant, bad and downright bizarre.

A blend of stand-up, chat and improv from one of Scotland’s top comedy talents, audiences can unveil their own ink, meet an array of special tattooed guests, play tattoo bingo and someone will even get the chance to be tattooed live on stage (don’t worry, it will wash off).

Since its world premiere at the Fringe last year, the show has toured comedy festivals all over the UK as well as the US and Canada, which means Billy has a whole host of new tales to share from the road. Billy also wants audience members to share their stories and show off their ink.

“It’s one of the most interactive shows at this year’s festival and gives audiences a real chance to be part of the experience – you can’t help but get involved,” said Billy.

Effortlessly funny with an energetic stage presence, Billy is one of the most in-demand acts in the UK, from his regular slots at the Stand Comedy Club – where he also hosts the weekly Improv Wars – to starring in a children’s’ television show.

He played ‘The Professor’ in the second series of the popular CBBC show, School of Silence.

Billy’s fresh from supporting comedy superstar Tim Minchin at Rockness, where he performed to over 5,000 fans, and has toured with Mick Foley, Michael Winslow and Rhod Gilbert.