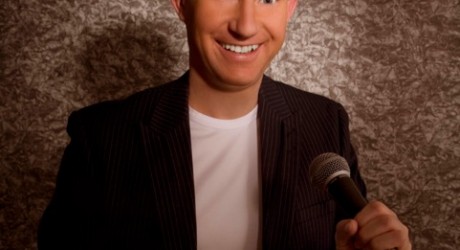 The probe, named Crikey 1, was propelled by a giant helium-filled weather balloon and was launched in the Western Australian outback, travelling 100 kilometres east where it was found in kangaroo inhabited bush next to a sheep farmer’s paddock.

More than 30 kilometres above the surface of the world, a recording of Cox recounting his amusing, dramatic and true travel stories played for the benefit of any passing aliens, astronauts and asteroids.

“I wanted to do something original to launch my new spoken word show,” Cox said.

“When Holidays Attack is based on the things that go wrong when travelling around the world. Launching a performance into space seamed the best way to best represent some of the adventures I’ve had in seven continents and over 40 countries.”

A passionate traveller, writer and expert raconteur, Andrew has spent most of his life roaming the world and retelling his favourite stories.

“No-one is interested in hearing about a nice holiday.

“However, people love hearing why the Peruvian army air lifted you out of a national disaster in a helicopter, or that you almost died with hypothermia in Antarctic waters, got attacked by a ghost or managed to escape death from a gang of gypsies in Transylvania.

“I outline my greatest mistakes so the next time anyone in the audience travels they won’t find themselves cold, hungry and wearing yesterday’s underpants – again,” he added.

Watch the video of Crikey 1 floating above Earth at www.andrew-cox.com