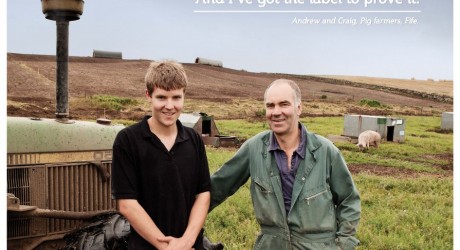 CONSUMER awareness of the Specially Selected Pork label has increased to a record 41 per cent in Scotland following a recent marketing campaign by Quality Meat Scotland (QMS) on behalf of the Scottish pig industry.

The key objective of the Scotland-wide campaign, which ran between May and July, was to increase awareness of the logo by target consumer groups in Scotland in order to encourage consumption and increase market share of branded product.

The campaign adopted the tagline, ‘When it comes to taste, it’s all about the label’, which communicates the benefits of purchasing Specially Selected Pork and provides a compelling reason for the shopper to look for the label at point of purchase.

The number of shoppers agreeing that the label is the ‘best available’ increased to 42 per cent compared to 35 per cent and encouragingly, in a time when household budgets are continuing to be squeezed, the number of shoppers who claim that they would pay more for the product rose to 39 per cent from 33 per cent.

“The Scottish pig industry is without doubt enduring a period of uncertainty and this record awareness of the quality of pork produced in Scotland is a very positive signal for our farmers.

“The survey results also show that consumers are recognising the commitment of our industry to high standards of welfare.

“The Scottish pig industry works very closely with Scotland’s leading animal charity, the Scottish SPCA. Indeed, our development of the ‘Specially Selected Pork Approved by the Scottish SPCA’ label was a ground-breaking initiative.

“In recent weeks our industry has taken further strides forward with the announcement of the first apprentices in the new Scottish Pig Academy and several major retailers have increased their commitment to sourcing and clearly labelling Specially Selected Pork.”

This year’s campaign was supported by QMS’s ‘Get Behind The Label’ advertising activity which covers all three brands – Scotch Beef, Scotch Lamb and Specially Selected Pork.