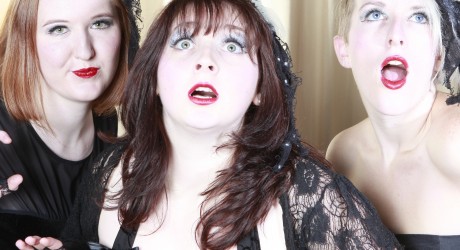 A TRIO of singers have seen their Fringe dream come true thanks to a a secret benefactor.

The Harmonettes, who are staging their hit show, The Harmonettes Go Into Orbit, at the Gryphon Venues at The Point in Edinburgh, only managed to stage their spectacular show after receiving an anonymous £10,000 donation from a secret fan.

Following a performance at a village hall in rural Cheshire earlier this year, the group were approached by a fan – an un-named Scots businessman – who insisted the show was so good they take it to this year’s Edinburgh Festival Fringe.

The BAFTA-nominated writer and director of the show, Janys Chambers, said: “I was stunned, I thought the gentleman concerned must be tipsy at first!… but no.

“He is just a Scotsman who loves the Festival and simply thought this was the best show he’d ever had in his local venue.

“It is he most generous gesture I’ve ever come across in the arts and we certainly wouldn’t have been able to come here without it. Quite wonderful.”

The girls are already having the time of their lives in the capital and the show is playing to packed houses every night.

They even received a five0star review from The Big Issue.

The sensational 1950s-style musical comedy features the amazing vocal talents of The Harmonettes (Charlotte Jones, Sarra Cooper and Georgina West) The Harmonettes Go Into Orbit is a spectacular production where singing along and hand-jiving are strictly encouraged.

The Harmonettes recall the heyday of 1950s fashion, music and singing in stunning three- part harmonies. The lively show features showstoppers of the day, including Boogie Woogie Bugle Boy of Company B, Fly Me To The Moon, Secret Love and Rock Around The Clock.

The Harmonettes Go Into Orbit is written and directed by BAFTA-nominated writer Janys Chambers (Holby, Emmerdale, Belonging) and follows the lives of three very different girls: The Little Rich Girl (“Don’t tell daddy!”) who’s running amok with her teddy-boy boyfriend; The Not-So-Rich Girl (“I haven’t even got a daddy.”) who dreams of space and science, and The Newly-Wed Girl (“Have you seen my new kitchen?”) whose only ambition in life is to make the perfect trifle. But the trio all have one thing in common – they love to sing!

THE HARMONETTES GO INTO ORBIT