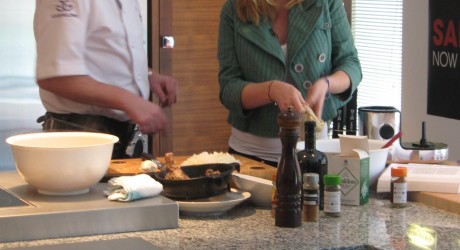 Using the traditional sheep’s lungs heart and liver, Paul made the haggis in the plush surroundings of Kitchens International’s showroom in Dundas Street, Edinburgh before dashing up to the busy Royal Mile to serve his beautiful dish to presenters Eve Jackson and Aziza Nait Sabiba at his award-winning Wedgwood the Restaurant on the Canongate.

Wedgwood the Restaurant has been awarded Restaurant of the Year for the last two years running, by the Scottish Licensed Trade News and is in the running for this year’s award.

French TV presenters Eve and Aziza had the opportunity to help Paul stuff the ingredients into the traditional sheep’s stomach…for themselves!

Famous for making haggis from a variety of ingredients, in all shapes and sizes, Paul has served up the traditional sheep’s haggis, black belly sheep haggis in Barbados which he invented for the Celtic Festival, venison haggis and even a haggis made from grouse, popular this month of the year.

Paul and his partner, Lisa Channon, opened Wedgwood the Restaurant in August 2007, and the restaurant has scooped many deserved accolades since then for its fine dining, and great service.

From a Silver medal at the Scottish Chef Awards, to a place in The Michelin Guide, to Best New Restaurant in the UK in Hardens Restaurant Guide, and in 2010 and 2011 a Fodor’s Choice Distinction Award.

The restaurant has also enjoyed very high UK rankings on Trip Advisor, and attracts many of the celebrities and performers from Edinburgh Festival during the month of August.

Paul is passionate about sourcing the best raw ingredients from his ‘local larder’ in Scotland and working with traditional recipes to delight his guests. His menus are inspired.