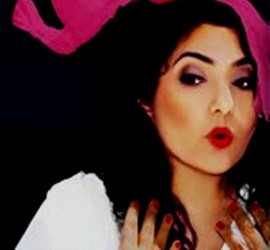 A special performance of the play is being followed by a discussion with the playwright and performer, Aizzah Fatima, who has received international plaudits and praise for her courageous, boundary-breaking work.

Sex, religion, and politics intermingle and collide in the play, as six American Muslim Pakistani women air their feelings, stories and experiences in a frank way.

The production is one of 400 events across 21 venues in the Festival of Spirituality and Peace, which runs from 3-27 August in Edinburgh.

The show’s creator insists the controversial title she has chosen is important to understanding what the play is about and what it is aiming to achieve.

“The juxtaposition of ‘Paki’ and ‘lingerie’ grabs attention since Pakistani women may be stereotypically thought of as very conservative and not sexual,” she says.

“But in the play, we learn that wearing the hijab doesn’t necessitate that one is conservative in all aspects of life.”

Ms Fatima plays some 20 characters altogether in the show, which is in turns funny, touching and thoughtful.

Says a spokesperson: “Among those characters is Selma, a hijabi feminist caught between her commitment to Muslim culture and her desire to wear sexy lingerie, and Asma, a mother searching for her daughter’s suitor in the Urdu Times Matrimonial section.

“Be prepared to have your outlook and preconceptions challenged by a robustly entertaining evening, is the message.”