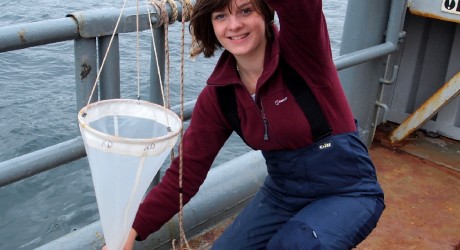 A PROACTIVE student who undertook ground-breaking research during her summer holiday has been named as the Scottish Association of Marine Science UHI Student of the Year.

20 year-old Ruth Paterson from Colintraive on the Kyles of Bute is going into her final year of a BSc degree in marine science at the Oban-based institute, which is part of the University of the Highlands and Islands.

She was nominated for the award by her tutors who were impressed with her motivation and exemplary academic work.

Ruth took the initiative to secure a grant from the British Phycological Society to carry out a two month project into a species of algae that can make shellfish poisonous to humans.

Alexandrium tamarense, a single-celled marine alga that drifts with the currents, can accumulate in shellfish flesh, but only some strains are toxic.

Ruth set out to determine whether toxic and non-toxic strains are capable of consuming tiny algal cells as toxin-producing strains may gain competitive advantages from this in the environment.

The work could help to prevent illness and the loss of shellfish farmers’ crops.

Ruth conducted the research during her summer break in 2011 and was so successful that her initial findings have been included in international marine conferences and publications.

She has also received more British Phycological Society funding to continue the project this summer, with her latest results due in October.

The work proved to be challenging, but she displayed excellent scientific credentials. The quality of her work is evident from the further funding she’s received.

“Ruth has also presented her work at a range of scientific meetings at a considerably higher level than one would expect from an undergraduate. Such presentations are potentially daunting, but Ruth carried them off excellently.”

Professor Laurence Mee, director of the Scottish Association of Marine Science UHI, added: “Alexandrium is becoming a massive problem for the shellfish industry.

“Ruth showed huge confidence and dedication by undertaking this work and this is a great success story for research-based teaching; she’s a wonderful example to others.”

Ruth said: “I’m overjoyed with the award. I continue to love my time here at the marine institute and look forward to a stellar fourth year completing my honours degree.

“This course is simply fantastic and applying was the best decision I ever made.

“The student body, lecturers and scientists provide me with the motivation to succeed and have an amazing time while doing so.

“My project showed me what it’s really like to work in a research environment by communicating with and working in close proximity to scientists – it’s totally different from the student experience.

“I’m so lucky to have the SAMS UHI facility on my doorstep! Attending an international research conference has definitely been one of the highlights and it showed me what hard work can bring you.

“It was very inspiring to be amongst many like-minded phycologists getting excited about algae.

“I’d like to thank Dr Keith Davidson for his help and advice and Mrs Christine Campbell who provided the algal cultures for this project.

“I’m also grateful to the BPS for their continued support and the UHI development fund which provided funding for me to attend the BPS annual meeting in October 2011.”

MEDIA RELEASE posted by UHI. You too can post media releases (aka press releases) on allmediascotland.com. For more information email here.