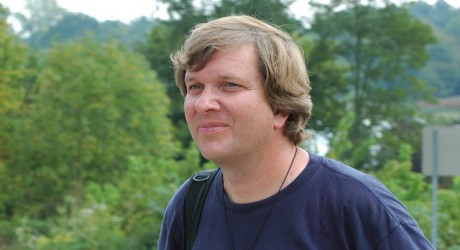 NOBEL Peace Prize nominee and globally-recognised advocate for peace and nonviolence, Fr John Dear SJ, will be taking part in the Festival of Spirituality and Peace on 22 August.

The Catholic priest will be on the platform alongside the Rev Kathy Galloway, who is the head of Christian Aid in Scotland and a former leader of the Iona Community. The conversation session is entitled, ‘The Spirituality and Practice of Peace in a World of War’.

The discussion, which will be moderated by Brian Larkin, Coordinator of the Edinburgh Peace and Justice Centre, will explore the resources needed to engage in active peacemaking in a world Fr Dear believes is “addicted to war and weaponry”.

Fr Dear will then embark on a series of talks across Britain entitled ‘The Cost of Peace – Violence or the Nonviolent Jesus?’

His visit to these islands will last until mid-September, and will constitute the launch for a series of nationwide initiatives and courses in the future.

A Jesuit Priest, pastor, peacemaker, organiser, lecturer, and retreat leader, Fr John Dear is the author and editor of 25 books.

In 2008, he was nominated for the Nobel Peace Prize.

He has been involved in conflict transformation work all over the world, including Guatemala, Haiti, Northern Ireland, Iraq and the USA.

From 1998 to 2000, Fr Dear was chief executive of the Fellowship of Reconciliation, the largest interfaith peace organisation in America.

After September 11, 2001, he worked for the Red Cross as coordinator of the chaplain programme at the Family Assistance Center. After serving as pastor in New Mexico, Fr Dear now holds lectures at schools and churches all over the world and writes a regular column for the Catholic National Reporter.

The Festival of Spirituality and Peace, now in its twelfth year in Edinburgh, features 400 cultural and discussion events across 21 venues. Its theme this year is ‘Cooperation for Change’.