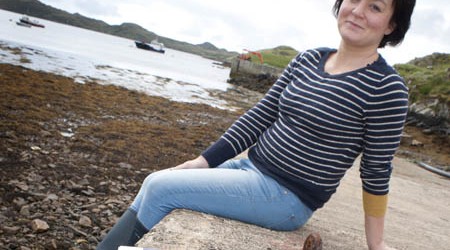 THE world-renowned sweeping sands of the Western Isles evoke a sense of unspoiled beauty and what is believed to be Scotland’s first gourmet sea salt company hopes to benefit from the area’s reputation for environmental purity.

Natalie Crayton’s (30) commitment to setting up Hebridean Sea Salt is such that she has relocated her three young children from the island of Tiree to Lewis in the Western Isles, accompanied by her partner too, who is a fisherman and works the 150-miles or so of water that separate the two islands.

Born and brought up in Edinburgh, after studying marine resource management at the University of Aberdeen, Natalie moved to Tiree in 2004 whilst working as a volunteer for the Hebridean Whale and Dolphin Trust.

Seven years later, she reluctantly decided to leave the island she had developed such affection for, and pursue ambitions to start her own gourmet sea salt business.

In between juggling the demands of two toddlers and a five year-old, Natalie, spent every hour she could researching how to harvest sea salt.

Natalie was nominated for the BT Scotland Young E-ntrepreneurs awards scheme which is administered by Youth Business Scotland.

During the last 12 years, BT Scotland has invested more than £500,000 in supporting young Scottish entrepreneurs use e-commerce to boost their start-up success.

Her next step was to brief a team of engineers to develop plans for a small processing plant on the Island of Lewis so that she could start production.

Explaining, Natalie said: “We started trading in May this year from a small pilot plant about a mile from where we live. We currently process around two tonnes of sea water a day, and I have two part-time employees helping me.

“We remove the water by evaporating it slowly in shallow salt pans which produces nice big salt crystals, which we then hand harvest and gently heat in ovens to complete the drying process.

“From this, we produce around 100 packets of sea salt per day, but we plan to increase this soon to 2,000 packets a day.”

Hebridean Sea Salt is currently sold in 30 independent retailers throughout Scotland and a recent order has just been secured with Clarks Fine Foods which will see the product go into another 40 outlets.

She is also about to launch her website, which is being part funded thanks to start-up funding from the BT Scotland Young E-ntrepreneurs awards scheme, and hopes this will generate additional interest in her brand.

“This is not the usual corporate story,” said Natalie. “It’s about true, Scottish provenance, and a family who are making the best of what natural resources the islands have to offer, with a desire to promote a naturally-sourced product with nothing added or taken away.

“A local brand that we hope people will come to recognise and develop genuine warmth towards.”

Speaking on behalf of BT Scotland, partnerships director James McClafferty said: “One of the best things about the BT Scotland Young Entrepreneurs programme is the diversity of the people and ideas it supports.

“In this case, Natalie has built a fascinating business from scratch, using the natural resources available on her doorstep and a process based on traditional methods used in Scotland for centuries.

“The care taken in production values and the commitment and belief she shows in her product are really commendable.

“We hope her new web site will help her achieve the wide recognition her gourmet brand deserves, and bring her new orders from across the UK and overseas.”

MEDIA RELEASE posted by Panache Communications. You too can post media releases (aka press releases) on allmediascotland.com. For more information email here.