Media Release: Fill up the looming rainy weekends with a fun educational trip to Roman Army Museum and Roman Vindolanda 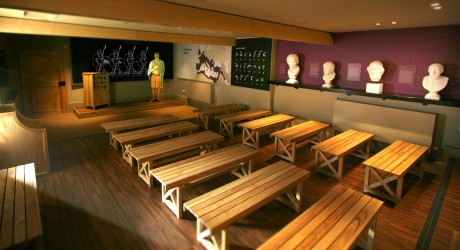 NO matter how deep we bury our heads in the sand we can not escape the fact that the end of the summer is neigh.

Continues a spokesperson: “Schools terms are beginning, the sales have all but disappeared from the shops and the word showers is appearing at an increasing frequency in the weather forecast.

“If the rain begins to get too much and you feel you need to get away from it, then look no further than The Roman Army Museum and the Roman Vindolanda Fort and Museum near Hexham, Northumberland, where Edinburgh-based Studio MB were commissioned to design and create an absorbing Roman experience.”

The spokesperson continues: “At the Roman Army Museum you’ll be recruited into the Roman Army by a Roman Centurion and learn what everyday life on the frontier was like for an ordinary soldier over 2,000 years ago.

“If joining the army is not for you, then Holographic tutor, Velius Longus, will give you a truly unique Roman lesson on their language, ensuring your maths is up to his standards and instilling Roman morals in order to prepare you for life in the empire.

“Seven miles down the road is Roman Vindolanda Fort and Museum.

“Experience the past being unearthed before your eyes through live archaeology taking place every day amongst the remains of the spectacular fort.

“Something not to be missed are the Vindolanda Writing Tablets, voted by the British Museum as ‘Britain’s Top Treasure’.

“These postcards from the past are believed to beBritain’s oldest surviving handwritten documents; you’ll be able to inspect family correspondence from millennia gone by discussing everything from parties to panties, you can see just how little anything has really changed.

“There truly is something for everyone in the family to enjoy at Roman Vindolanda Fort and Museum.”

The two museums opened in March 2011 after an extensive re-development process led by the exhibition design experts, StudioMB.

Through the unique collections of The Vindolanda Trust Studio MB were able to reveal the genuine stories of hundreds of known military and civilian people living out their lives on the Northern frontier of theRoman Empiresome 2,000 years ago.

The presence and intricacies of the interpretationStudioMBhave created at Vindolanda is realised by the number of awards presented to the museum.