Media Release: National Theatre of Scotland tours to Asia for the first time 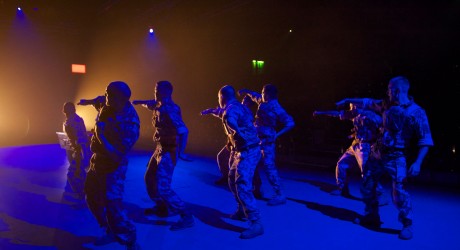 THE National Theatre of Scotland is delighted to announce that the company will be touring to Asia for the first time, in autumn 2012.

Over the last six years, the National Theatre of Scotland has created a repertoire of touring productions that have been in demand at home and abroad, and international touring has become an important part of the Company’s programme.

Both Black Watch and The Monster in the Hall will be performed with surtitles.

Black Watch by Gregory Burke and directed by John Tiffany is touring from September 2012 to Chicago, Washington and later in 2013 to Seattle and San Francisco.

The production has already played to over 200,000 people across three continents.

The production is being presented by the National Theater of Korea from 26 to 28 October, in their main theatre space.

The National Theatre of Korea is in Seoul, South Korea.

Ahn Ho-sang, president of the National Theater of Korea, says:

“The reason why we especially chose Black Watch from all of the National Theatre of Scotland’s extraordinary original performances is because of the theme of the ‘Iraq war’.

“Korea has established a conscription system which will see almost all young men serve in military and some troops have already been dispatched to Iraq, as their  fellows have been in Black Watch.

“Korean audiences will deeply empathise with seeing a play about young men who volunteer to serve in the military with a light heart sayingm ‘Rather than becoming a supermarket clerk, maybe I’ll be a man and join the army’, then watch them unexpectedly get hurt during a horrendous war.

“I expect that the production will serve as consolation for both Korean and Scotland’s young people, who share the pain and tribulations of growing up in the modern world.”

The National Theatre of Scotland also tours acclaimed productions that have previously been produced by other theatre companies.

The National Theatre of Scotland is delighted to take the Citizens Theatre’s production of The Monster in the Hall to China in October and November 2012.

The production is touring to Shanghai Grant Theatre (23 to 25 October), Nanjing University Theatre (27 and 28 October) and Xian Musical Hall  (29 and 30 October)  and Nine Theatre, Beijing (1 to 3 November).

These dates have been made possible by a financial contribution from Made in Scotland and are supported by UK Now.

This Asian premiere is part of a three month National Theatre of Scotland UK/China tour of the Citizens Theatre’s productions of The Monster in the Hall and Yellow Moon, both by David Greig, and directed by Guy Hollands, from September 2012 throughout the UK, visiting small studio spaces, arts centres, colleges and schools in Glasgow, Fife, the Western Isles, Kilmarnock, Renfrewshire, Aberdeen, Bath, Wales and Oxford.

The UK tour is supported by Bank of Scotland Pioneering Partnership.

Guy Hollands, director of The Monster in the Hall and associate director (Citizens Learning), says:

“We are delighted that the National Theatre of Scotland is touring our award-winning production of The Monster in the Hall to China and it is with great anticipation that we look forward to seeing how young people in China respond to the themes and issues explored in the show.

“We have found that its message and impact resonates with adults and young people from across the UK and in Macau where we have toured previously. We have no doubt that it will.”

“The National Theatre of Scotland is thrilled to be taking work to Asia for the first time. Amazingly, in the case of Black Watch, after six years of touring, it will be the first time that it has been presented with surtitles.

That it should be in South Korea, which has a very live issue surrounding the role of its military, is particularly exciting. David Greig is a writer of universal appeal so to present the brilliant Citizens production of The Monster in the Hall in four Chinese cities is a tantalising prospect.”

1.  The National Theatre of Scotland is supported by the Scottish Government.  Since its launch in February 2006, the National Theatre of Scotland has been involved in creating 181 productions in 156 different locations. With no building of its own, the company takes theatre all over Scotland and beyond, working with existing and new venues and companies to create and tour theatre of the highest quality. It takes place in the great buildings of Scotland, but also in site-specific locations, airports and tower blocks, community halls and drill halls, ferries and forests. The company has performed to over 770,000 people, across three continents.

2. The Citizens Theatre is an iconic venue and theatre company based in the Gorbals area of Glasgow, Scotland, led by artistic director, Dominic Hill. The Citizens Company was founded in 1943 by Scottish playwright James Bridie and the Citizens Theatre was permanently established in 1945. Since then it has been one of Scotland’s flagship producing theatres presenting a world-class repertoire based on British and foreign classics, contemporary plays and new writing. The Theatre’s rich variety of projects and productions offers an unrivalled range of work in Scotland. As the name suggests, the theatre believes its work can enhance the lives of citizens of all ages, cultures and social backgrounds and the continued ambition is to provide unique cultural experiences that bring lasting benefit to everyone involved.

4. The National Theater of Korea was founded to preserve Korea’s traditional performing arts, which have been handed down over thousands of years, in order to make the unique individuality of Korean art better known to the world. Along with the performances of its three resident companies (the National Changgeuk Company, the National Dance Company, and the National Orchestra), the National Theater supports major national cultural events and operates various programs including festivals for the public, regional tours, and arts education.