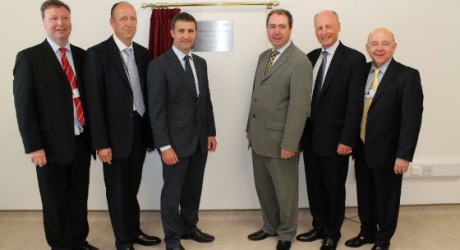 IT is built on a site steeped in local history and from today (Tuesday 28 August) the Musselburgh Primary Care Centre will look to create a lasting legacy of its own.

Michael Matheson, Minister for Public Health, said: “Having the right facilities, in the right place is important to people across Scotland and that is why we are determined to ensure both staff and patients the length and breadth of the country can work and be treated in the best possible surroundings.

“It is fantastic to see the new Musselburgh Primary Care Centre open and treating patients in their local community. This is a prime example of how continued investment in our NHS is benefiting patients, by providing them with quality care as close to home as possible.

“Investment in health is a top priority for the Scottish Government and we have committed to spending over £2billion on improving NHS infrastructure over four years.”

Dr Charles Winstanley, chair, NHS Lothian, said: “I’m delighted that the new centre has been opened on-time and to budget and I have no doubt that it will provide excellent, modern and appropriate facilities for patients, enabling staff to deliver higher standards of care.”

The new building also boasts a number of green credentials, including a combined heat and power plant which generates approximately ten per cent of its own electricity.

David Small, general manager, East Lothian and Midlothian Community Health Partnerships, added: “I’m sure that patients, staff and the entire local community will be delighted to have this modern, high-quality healthcare facility on their doorstep and will reap the benefits of the new centre now, and for many years to come.”

Commenting on behalf of the three GP practices, Dr Johnstone Shaw, Eskbridge Medical Practice, said: “Musselburgh GPs are delighted to move into their new premises. They offer state-of-the-art, up-to-date facilities for the delivery of modern primary care which have been long needed for the area.”

Gill Wilson, chair, East Lothian Health Network (Public Partnership Forum), added: “We are very pleased that the facility has been opened and is serving the people of Musselburgh and the wider community of East Lothian.

|We’re pleased with the range of services that are available under one roof in particular; podiatry, adult physiotherapy and a host of children’s services.”

Councillor Donald Grant, East Lothian Council’s health spokesperson, said: “The Council welcomes this splendid new facility which will be of great benefit to the health and wellbeing of our residents.

“I would like to thank all the interested parties who worked together with determination and patience to ensure that this complex project became a reality.”

MEDIA RELEASE posted by NHS Lothian. You too can post media releases (aka press releases) on allmediascotland.com. For more information, email here.