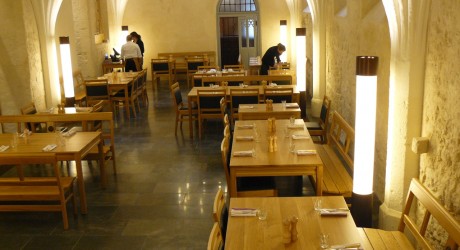 IN November 2011, Luke Hughes and Company won the design competition for the new furniture to be installed in the refurbished 14th century ‘Cellarium’ or Refectory at Westminster Abbey.

The new space is now to serve as a restaurant as well as to double-up as a venue for private and official events.

So, the furniture needed to be capable of rapid rearrangement, sustain the kind of knocks to be expected from half-a-million visitors annually and also be made of material that is both durable and likely to age gracefully whilst fitting in with the historic 14th century surroundings.

Luke Hughes took the view that the new use of the Cellarium should reflect its original associations.

For instance, monastic refectory seating would have used benches rather than chairs. Luke Hughes and Company have echoed such traditions and taken into account the demands of modern logistics by constructing a mix of three-seat stacking benches and stacking chairs.

The solid-oak tables have pegged tenons and mouldings to match the seating.

A medallion of the Abbey Coat of Arms was carved by George Mkrtichian then cast in bronze and inserted into each of the stacking benches.

Luke Hughes suggested, in the competition entry, his view that: “The Cellarium should resonate with the traditions of 500 years of monasticism and another 500 years of the nation’s relationship between Church and State.”

Luke Hughes and Company worked in collaboration with the architect Mark Panter of Panter Hudspith, the caterers Benugo and the Dean & Chapter.

Luke Hughes and Company have previously carried out work at Westminster Abbey in the Pyx Chapel and Sanctuary area, which was viewed during the Royal Wedding.

MEDIA RELEASE posted by Tartan Silk PR. You too can post media releases (aka press releases) on allmediascotland.com. For more information email here.