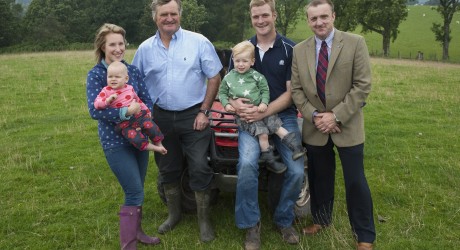 THE wide-ranging benefit of the monitor farm project to Scottish farming was a key factor in the decision by a Stirlingshire farming family to ‘take the bull by the horns’ and become the first monitor farmers for Forth.

Arnprior Farm, near Kippen, run by the McEwen family, has been selected as the region’s debut monitor farm, supported by Quality Meat Scotland and the Scottish Government’s Skills Development Scheme.

Duncan McEwen and his wife, Anne, run the 760 acre (345 ha) farm with their son, also Duncan, and his wife, Rebecca. The McEwen family have been tenants of the Garden Estate since 1936, when Duncan senior’s grandfather took over the tenancy of the farm, and landlord Archie Stirling is supportive of the family’s new role as monitor farmers for the area.

The farm business is mixed livestock and arable, with the progeny of around 75 suckler cows and around 500 mostly Scotch Mule ewes taken through to finish on the unit. Around 200 acres (80 ha) of crops are also grown on the farm including beans, oats, winter wheat and the high nitrogen barley variety, Belgravia.

Most of the farm is classified Less Favoured Area (LFA) and it extends to 590 feet above sea level on the hill. The unit encompasses a wide range of terrain from heavy Carse of Stirling soil to hill ground and rainfall – typically 55 to 60 inches – has a major impact on the performance of the farm.

“There’s no doubt the farm has plenty of variety to offer – we’ve got everything here from gravel to moss to blue clay.

“Every mile west of Stirling you get an additional inch of annual rainfall and weather has a huge impact on us here – it dictates everything,” said Duncan McEwan (snr).

While the weather clearly impacts on work in the fields – haymaking was five weeks late this year – the full impact on the performance of cattle has also been brought sharply into focus. The McEwens have been weighing cattle when they are turned out to grass and at housing for the past three years. The impact of rainfall on liveweight gain at grass has proved  dramatic, ranging from 1.1kg/day at grass during a drier year to 0.5kg/day during a wet year.

All the cattle are electronically tagged with Duncan (jnr) snapping up an EID tag reader for a bargain recently on Ebay in a successful bid to lower the cost/head of livestock of investing in EID equipment.

One recent management change has been a switch from synchronising cows back to using bulls more naturally. “We’re keen to tighten up our calving pattern and we’ve been using teaser bulls to help achieve this,” said Duncan.

Among the first to congratulate the McEwens on their appointment was QMS Chairman, Jim McLaren, who visited the farm this week.

“We’re delighted to welcome the McEwens on board and I’m sure they will be first class monitor farmers. The announcement of Arnprior further strengthens the monitor farm network around the country and we are very keen to ensure as many farmers in Scotland as possible benefit from the lessons learned as well as community group members attending monitor farm meetings.”

Two facilitators have been appointed to support the Forth Monitor Farm – Stephen Whiteford and Colin MacPhail of SAC Stirling.

The impetus to set up the Forth monitor farm, as well as the Clyde monitor farm which has recently been announced, came from members of NFU Scotland’s Forth and Clyde region.

Tom French, regional chair of NFU Scotland Forth and Clyde, said he was delighted the Forth monitor farm and facilitators are now appointed:

“The McEwen family will, I am sure, be excellent monitor farmers and farmers in the Forth and Clyde region will very soon be able to attend and take part in this exciting and much anticipated project.

“Arnprior is a farm which offers tremendous scope as a monitor farm with lots of variety and the opportunity to try new ideas and approaches will generate much interesting discussion and debate.”

MEDIA RELEASE posted by Quality Meat Scotland. You too can post media releases (aka press release) on allmediascotland.com. For more information, email here.