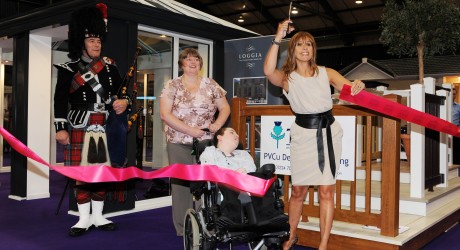 MORE than 8,000 visitors flocked to the launch of The Scottish Home Show 2012 this weekend (1-2 September) at Aberdeen Exhibition and Conference Centre.

The new home improvements, interiors and garden design exhibition was the first major home event of its kind to be hosted in the North-east in recent years and attracted a major response with more than 200 exhibitor stands taking part.

The event, in association with Thistle Windows and Conservatories, highlighted some of the most luxurious home and garden products, innovative new technology and gadgets on the market, with a range of displays showcasing garden designs and conservatories, the latest home interior designs, kitchens, bathrooms and home technology.

TV personality, Carol Smillie, opened The Scottish Home Show 2012 on Saturday morning along with Greg Henderson, 13, and his mother Carol, who have been receiving support from Children’s Hospice Association Scotland (CHAS), which was selected by organisers as this year’s chosen charity.

Snooker legend, Steve Davis OBE, also made a guest appearance on the Thistle Windows and Conservatories stand over the weekend and The Nick Nairn Cook School hosted regular demonstrations throughout the weekend, which attracted a great response from visitors to the AECC arena.

Director of the Scottish Home Show, Darren Ross, said: “We have been absolutely overwhelmed by the support we have received for the first ever Scottish Home Show here in Aberdeen, not only from exhibitors but also from the number of visitors who continued to flock to the AECC in their thousands over the weekend.

“The numbers of visitors have far exceeded our expectations and it’s been an amazing weekend for everyone, with many exhibitors going home with lots of sales and strong leads. A fantastic event for everyone involved and we’re looking forward to planning 2013.”

Brian Horsburgh, managing director of Aberdeen Exhibition and Conference Centre (AECC), said: “The inaugural Scottish Home Show has been a tremendous success. We have received many very positive comments from those who attended the show, as well from exhibitors, and it was great to see so many people visiting.

“We look forward to working with the organisers on the next Scottish Home Show in 2013.”

The Scottish Home Show, in association with Thistle Windows and Conservatories, was supported by a range of North-east firms with Stewart Milne Homes as gold sponsor, Laings DirectLine Bathrooms & Kitchens and Drumrossie Homes as silver sponsors and Dandara as media sponsor and joint TV sponsor with Grampian Continental.

To find out more about the Scottish Home Show 2012 at www.scottishhomeshow.com

CHAS is a charity that provides the only hospice services in Scotland for children and young people with life-shortening conditions. The charity runs two hospices, Rachel House in Kinross and Robin House in Balloch and a CHAS at Home service that offers specialist care and support to families in the comfort of their own home when they need it most.

Issued by Frasermedia Ltd on behalf of Scottish Home Show 2012.