Media Release: Young butcher is a cut above 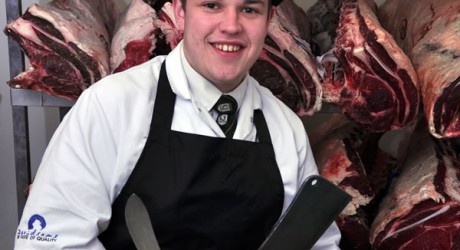 A 20 year-old butcher from Oldmeldrum is flying the flag for Scotland by successfully becoming one of only three UK finalists in a national competition.

Andrew Peter, who works at Davidsons Butchers in Inverurie, began his apprenticeship there less than three years ago and last week was announced as a finalist in The Meat Trade Journal’s UK Young Butcher of the Year.

The accolade will only add to the huge array of awards and nominations that the Inverurie and Aberdeen-based business, Davidsons Butchers, has amassed in the past few years, including being the current holder of the UK Butchers Shop of the Year title.

Andrew first began working for John Davidson as a Saturday boy back in 2007, and in 2010, eight months after leaving to begin his studies in social work, he realised that butchery was exactly what he wanted to do and went back to Davidsons to begin his Apprenticeship.

Andrew commented: “I really missed the customer interaction, the job variety, the passion for perfection that is paramount to every aspect of Davidsons – and I missed the banter!

“I’ve learned so much so quickly here, and I think being a finalist in this competition shows how far I’ve come in a relatively short space of time.

“I am exceptionally passionate about my job, and the meat industry in general, and this year I have taken on my own apprentice – a great responsibility, and also a sign of the trust and faith that John Davidson has in me.”

Confirmation of Andrews’s top three place in the awards came last Friday and John Davidson was delighted to make the announcement to Andrew and the rest of the team.

He said: “Andrew has excelled beyond all expectations in his time here so far. His drive for excellence is outstanding and fits extremely well with the whole ethos at Davidsons.

“His enthusiasm and sense of humour is extremely infectious and keeps morale high during our exceptionally long and busy days.

“Andrew was very excited about entering the competition, and I knew that he would put all the time and energy required into putting together a successful entry.

“We are all very proud of Andrew, and look forward to the awards ceremony later in the year.”

The Meat Trade Journal awards recognise and reward the top butcher’s shops across six regions in the UK, as well as crowning one as the overall UK Butcher’s Shop of the Year.

Having won the top accolade in 2011, John Davidson stepped down from the competition this year and was honoured to then be invited to be one of the Judges in this year’s UK Butcher Shop of the Year category.

The venue for this year’s prestigious awards will take place at The Landmark London Hotel in Marylebone on Thursday, November 22.