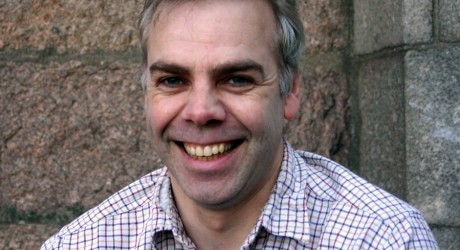 BULL fertility was among the key topics discussed at the recent meeting of the Cairngorms Monitor Farm, one of the network of Quality Meat Scotland (QMS) monitor farms throughout Scotland.

The monitor farmers – George and Fiona Gordon and son Charles, farm a total of 1,157 acres (468 ha), based at Lost Farm, near Strathdon, 45 miles west of Aberdeen.

There are two cattle enterprises including a 100 cow spring and autumn calving suckler herd, with heavy Simmental influence, from which all progeny, other than retained heifers, are sold as yearlings.

The Gordons also annually purchase 60 bulling heifers, which are bulled and calved for re-sale, with two to three month old calves at foot.

Their current bull team consists of one Charolais (terminal sire), two Simmentals (dual purpose), and one Limousin (for heifers). The Gordons plan to buy two additional bulls this autumn.

With imminent bull purchasing in mind at the monitor farm meeting the farm’s vet, David Miskelly of The Woodside Veterinary Group at Torphins, was there to offer advice.

A recent survey of 386 bulls in southern Scotland (Penny), revealed one in three to be sub-fertile.

“A number of diseases, including BVD, IBR and Johne’s can impact on fertility, as well as bringing disease into your herd,” explained Mr Miskelly.

“Aim to buy bulls with a known health status, including an individual clear BVD test followed by vaccination, backed up by certification, signed by the breeder and his vet.”

Thanks to Scotland being the only British country with official Tuberculosis Free status, cattle from Northern Ireland and high incidence areas (one and two year testing) south of the Border, need a negative pre-movement test, plus a post-movement test 60 to 120 days after arrival in Scotland.

A positive second test can create major problems for the buyer.

When considering the physical aspect of the bull testicles should be of equal size and consistency. Size relates directly to fertility, with bigger being better.

“The measurement around the scrotum should be at least 32 centimetres,” said Mr Miskelly.

“Anything less increases the risk of the bull becoming sub-fertile. Also bulls with large testicles are likely to stay fertile for longer. The penis and sheath must be in full working order, with everything moving freely.

“Some pedigree breeders now offer semen-testing of bulls prior to sale, and a growing number of commercial breeders are requesting this test be done, either by the vendor prior to sale, or by their own vets after the bull has been purchased.

“Nutrition is also a factor, with many young bulls at auction having been pampered and fed too well to be turned straight into a group of 30 cows and expected to get them in calf.

“The demands placed on the youngster, who suddenly finds himself in a strange and far less comfortable environment, as well as not receiving anything like the food he was getting before, results in his semen quality plummeting.

“Also, as his muscles haven’t developed, he risks injury.”

Mr Miskelly recommended buying naturally brought on young bulls or to buy young bulls several months before they are to be used, enabling the buyer to gradually take the bull to working order condition.

“When you turn a young bull into his first group of females, he has a lot do,” explained Mr Miskelly.

“He has to look after himself, find the females and serve them correctly, which can be challenging for an inexperienced youngster. Meanwhile, he is likely to be bullied and pushed around. All this can impact on his libido as well as fertility, so it’s worth giving him a bit of feeding, to help keep his spirits up.”

Irrespective of bull age, Mr Miskelly advised closely monitoring groups of females which had been running with a bull for at least three weeks.

“A significant number of females returning to service after the first three weeks could suggest bull fertility or libido problems. Older bulls can become fussier or lazier.”

A regular ‘MOT’ of all bulls two months prior to use, to pick up any fertility problems, was also recommended, with the basic assessments including feet, gait, heart, eyes and blood.

“A lot can go wrong with a bull, which can affect his physical ability to work and/or his fertility,” commented Mr Miskelly.

“Physical complications include lameness, which could be caused by feet, joint or back problems.

“The penis or sheath can be injured. The penis may also develop a deformity. A ‘corkscrew’ penis can develop over time, and while a bull with this condition may be able to serve smaller cows, he would struggle with larger continental crosses.

“Semen quality is crucial, so a semen test plus assessment of the base of the penis and semen producing glands are worthwhile.

“Blood tests will help to identify health problems which may impact on fertility, for example Johne’s, which will suppress a bull’s fertility before visible signs develop.”

Estimated Breeding Values (EBVs) for bulls will be discussed at the monitor farm meeting scheduled for early October.

The next meeting of the Cairngorms Monitor Farm, to be held this month, will be an open evening meeting, including a farm walk.

For general information on Monitor Farms, plus detailed reports of meetings and details of forth-coming meetings visit: www.qmscotland.co.uk/monitorfarms