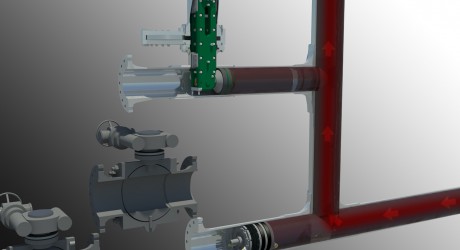 THE successful deployment of STATS Group’s BISEP isolation technology prevented the costly shutdown of a Malaysian pipeline and allowed it to maintain uninterrupted gas production at full operating pressure of 78 barg.

Pipeline engineering specialist STATS was approached by PETRONAS Carigali to provide double block and bleed isolation services to allow the replacement of two welded flange valves at the Onshore Slug-Catcher (OSC) at Terengganu.

The OSC forms part of the Angsi field which is situated off the east coast of Peninsular Malaysia in the South China Sea and is a joint venture between PETRONAS subsidiary PETRONAS Carigali Sdn Bhd and Exxon Mobil Exploration and Production Malaysia Inc.

Dehydrated compressed gas from the Angsi complex is transported 166km via the 32” pipeline to the OSC in Kertih, Terengganu.

To allow gas production to be maintained, STATS was required to provide two simultaneous isolations to ensure the receiver, valves and 18” kicker line, were fully isolated to facilitate the valve replacement workscope without interrupting production flow. STATS positioned a 32” Tecno Plug™ which was pushed to the set location with a hydraulic extension and tether control system.

This purpose-built system was installed into the receiver and then activated once inside the closed receiver. The Tecno Plug™ was positioned with millimetre accuracy in a short section of pipe spool inboard of the production tee, and once successfully set and tested STATS installed an 18” BISEP™.

This patented technology was deployed through a single hot tap penetration complete with slab valve into the receiver kicker line, which fully isolated the launcher and enabled easy replacement of two 18” kicker valves.

These simultaneous double block and bleed isolations enabled the two 32” motor operated valves to be renewed with zero interruption to production. All isolation tools deployed in this workscope were designed, manufactured and factory acceptance tested (FAT) at STATS’ headquarters in Aberdeen, Scotland.

STATS comprehensive in-house certification of all equipment included hydraulic function testing and pressure testing of the isolation tools. The FAT was performed in a purpose-built test fixture to replicate the client’s pipeline, including system configuration and pipe schedule. All testing was witnessed by an independent verification body.

STATS Group’s business development manager for South East Asia, Chris Lilley, said: “This project marks a significant milestone for STATS. We have previously installed remote controlled Tecno Plugs™ in Malaysia, however, this is the first time that our patented BISEP™ and hydraulically operated tethered Tecno Plug™ technology has been used in Malaysia.”

STATS’ isolation services are increasingly in demand from major operators in Malaysia and the workscope for PETRONAS Carigali is one of many high profile contracts completed in the Far East.

‘STATS Group’ is the recognised company name. The business was founded in Aberdeen in 1998 as Specialist Tools and Testing Services.

Our key drivers of providing innovation, value and rapid response, has cemented our reputation in the UK-North Sea and other oil producing regions for always exceeding client expectations. Every product in the STATS portfolio is designed, manufactured, assembled and tested by our own in-house engineers and technicians.

In February 2012, Business Growth Fund (BGF) invested £7.8 million in STATS Group. BGF was established to help the UK’s fast growing smaller and medium sized businesses. BGF is an independent company with capital of up to £2.5 billion, backed by five of the UK’s main banking groups – Barclays, HSBC, Lloyds, RBS, and Standard Chartered. BGF is managed completely autonomously with an independent management team.

Issued on behalf of STATS Group Ltd by Sure Public Relations. For further information please contact Stephen Rafferty on +44 (0)7980 598764 or email moreinfo@surepr.co.uk