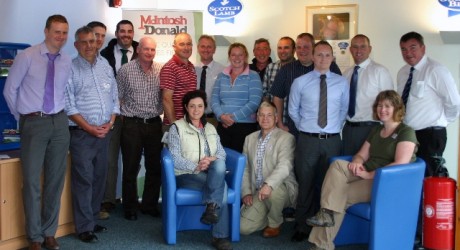 THE benefits of two-way communication between livestock finishers and the abattoirs they supply were highlighted at the recent meeting of the Organic Monitor Farm, organised by the Scottish Organic Producers Association (SOPA) and Quality Meat Scotland (QMS).

This off-farm meeting was held at the Vion McIntosh Donald abattoir at Portlethen, Aberdeenshire, destination of the organic prime cattle and lambs from monitor farmers, the Cooper family.

The family runs 125 suckler cows and 720 ewes, plus approximately 400 ewe lambs, at Mains of Thornton, near Inverurie.

One of the main topics of discussion between the monitor farm community group and the management team at McIntosh Donald was liver fluke, a growing concern for livestock farmers and processors.

Fluke is estimated to cost the Scottish livestock industry around £50 million per annum.

Fluke affects livestock performance and/or fertility and can be fatal. On the processing side, the value of the ‘fifth quarter’ is an important part of the slaughter process.

A fluke-damaged ox liver, weighing on average, 5.5 kgs, is automatically diverted from the human food chain to pet food. The loss in value is over £3.00.

McIntosh Donald factory manager, Craig Anderson, explained to the community group that approximately 50 per cent of all cattle and up to 80 per cent of all lambs killed at Portlethen, have fluke-damaged livers.

Farmers who supply cattle to McIntosh Donald, are notified on the payment report ‘kill sheets’ of fluke damage to livers, alongside the relevant animal’s ear tag number, dead weight and grade. This information alerts the supplying farmer to a fluke problem, if he was not already aware.

The cattle line operates at the rate of 53 head per hour, whereas the sheep line throughput is 250 per hour at McIntosh Donald. Large dedicated lamb processors can achieve speeds in excess of 500 per hour, making the supply of individual sheep health information, for example fluke, difficult.

For organic farmers, the withdrawal period, after administration of flukicide to animals destined for the food chain, is 112 days, double the conventionally farmed period.

Consequently, the community group highlighted the value of being alerted, as soon as possible, to a fluke problem in their stock.

Some queried whether or not it was worth sacrificing the organic premium (currently approximately 50p per kg dwt, for beef), to send the flukicide treated animals for slaughter 56 days earlier.

Fluke in their cattle had been previously flagged up to the Coopers by McIntosh Donald. This had prompted them, working with their vet, to draw up an Organic Livestock Health Plan, as required by SOPA, to manage fluke treatments, along with other livestock health and welfare.

Mr Anderson told the group, that while fluke is an animal health concern, there are additional internal organ problems which impact on stock performance and decrease carcase value.

“The lungs in hoggets, are generally poor, having been damaged by either pneumonia, pleurisy or lung worm,” he explained. “We see the peak of this type of problem towards the end of March.”

Mr Anderson told the community group of one batch of 103 lambs, from which only three of the 206 lungs were collected for human consumption.

He also highlighted the importance of careful handling of animals prior to slaughter. In addition to avoiding injuring or bruising an animal, this also helps to suppress livestock stress. Stress lowers an animal’s muscle glycogen levels which badly affects the meat’s eating quality.

One of McIntosh Donald’s key customers is Tesco. To supply the cuts and type of meat required, the carcase specification for cattle is 320 – 380 kgs dwt, conformation grade – minimum R, Fat – maximum 4H. The target carcase is R4L.

A discussion took place regarding the inefficiencies for the farmer in taking animals beyond 4L, due to poor feed conversion of laying down fat as opposed to muscle.

Portion size is crucial for supermarkets, as well as the amount of fat cover. The message coming back from the consumer is that they do not want fat.The lamb spec is 16 – 21 kgs dwt, (organic is 13 – 21 kgs), conformation grade – minimum R and fat – maximum three.

The target carcase is R3L.

Of the average weekly McIntosh Donald kill of 1,450 cattle and 2,250 lambs, all farm assured, approximately 60 cattle and 600 lambs are organic. Murray Gibb, the organic procurement manager for McIntosh Donald encouraged consignors, conventional and organic, to visit the abattoir to see their stock post slaughter.

“There’s a great deal to be learnt from seeing your own stock hanging up,” explained Mr Gibb.

“This helps us to show a farmer a problem he may not have considered, or was not aware of. It also helps farmers understand the reasoning behind requests we’ve made. There’s a great deal of two way benefit for all concerned.”

The next organic monitor farm meeting will be on 8 November, 2012.

Caption: Members of McIntosh Donald staff with the organic monitor farmers, members of the community group and facilitators.