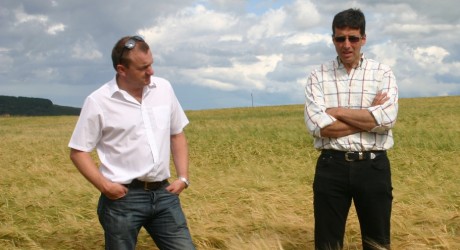 THE impact of the escalating price of barley on already slim cattle finishing margins, was the main topic at the recent meeting of the Quality Meat Scotland (QMS) Moray and Nairn monitor farm.

Monitor farmer, Robbie Newlands, who farms with his wife Kirsty and father, also Robbie, at Cluny, near Forres, intensively finishes all progeny from the spring calving, out-wintered, herd of 170, mainly British Blue cross Holsteins. All cows go to Charolais bulls.

This year, bought-in replacement heifers ran with a Simmental bull instead of a Limousin. Male calves are kept entire.

In addition to the cattle enterprise at Cluny, a 1,060 acre mixed LFA unit, there is a flock of 650 ewes and 150 acres of barley, plus 50 acres of forage crops.

They are then housed in straw yards, where they receive an ad-lib, hopper-fed, barley, soya, minerals mix with hay/straw in ring feeders.

All barley fed is home-grown but with the rising prices of seed, spray and particularly fertiliser, Robbie Newlands has seen his barley growing costs increase by 36 per cent.

QMS figures for the 12 months to the end of April 2011 for ‘rearer finisher’ enterprises, show that for the 21 enterprises costed, before subsidy payments, the average net margin was minus £140 per cow, with only two enterprises achieving a positive net margin.

The Newlands’ enterprise compares well. With feed barley costed in at sale value, the running figures for the 2011 calf crop currently show a slight loss of £32 per cow.

However, if the barley is costed in at production cost, the cattle net margin is positive.

Of the 136 cattle, 59 bulls and 77 heifers from the 2011 calf crop finished prior to the meeting, bulls had averaged 435 days to slaughter, heifers averaged 421. Bulls averaged a DLWG, from birth, of just over 1.4kgs with heifers just under 1.2kgs.

With the bulls which were born in 2012 ‘in the system’, the heifer calves offer more alternative options, which were thoroughly discussed by the community group. Discussions included the traditional cattle farmer custom of future store cattle price, crystal ball gazing.

The group agreed that the 2012 switch to a Simmental bull for mating with replacement heifers created future opportunities to either retain some of the resulting Simmental cross heifers for breeding or sell them as bulling heifers.

As to the heifers born in 2012 which are mainly Charolais crosses with some Limousin-sired, numerous suggestions were made, including:

Of the numerous options discussed at the meeting, Robbie Newlands favoured sticking to his present system, but keeping the heifers longer. From birth to slaughter, the heifers born in 2012 slaughtered to date, grossed an average income per head of £2.53 per day.

“I found with the heifers which have gone away recently, that although they looked ‘fat’ (finished), when we received the abattoir sheets, they killed out leaner than they looked. So it seems we can take our type of heifers to higher weights without fear of them running overfat,” explained Mr Newlands.

“To keep the heifers, say an extra 30 days, while they are still young enough to efficiently convert their food into meat, would earn more than it would cost. But I will need to think things through, before any final decisions are made.”

QMS chair, Jim McLaren, who attended the meeting, reminded the community group of the looming CAP reforms, which may well bring changes to current support payments.

With CAP negotiations in mind, Mr McLaren encouraged the group to calculate the level of support payments needed in the future for suckler cow and breeding ewe enterprises, to achieve profitability.

“It seems highly likely that in the future, traditional store cattle finishers may not receive the same level of support through subsidies as they have in the historic system,” he explained.

“The breeder, as the producer of the primary animal, must be supported in the future along with the finisher, for the whole supply chain to function. Breeders tend to be on higher farms with fewer options.”

The meeting was also attended by New Zealand, South Island farmer, Matt Collins, who farms without subsidies. He has to base decisions on the financial viability of his farming options.

“The systems here look high cost in comparison to New Zealand, where there’s no wintering of stock under cover. We also need to work with bigger numbers, to spread our fixed costs,” he commented.

Mr Collins runs a sheep enterprise, plus a breeding herd of Hereford and Aberdeen-Angus cows, mated with Charolais bulls.

He said: “Sheep have paid well over the last couple of years, and the cows are merely used as a ‘clean-up tool’ for the sheep. The benchmark for grazing farms like mine is the dairy industry.

“Last year, I didn’t take any store cattle through the winter. Had I done so, they would have earned around eight cents (approx 4p) per kilo, whereas grazing dairy heifers over winter, earned 20 cents (approx 10p) per kilo.”

For general information on monitor farms, plus detailed reports of meetings and details of forth-coming meetings visit: www.qmscotland.co.uk/monitorfarms

MEDIA RELEASE posted by Quality Meat Scotland. You too can post a media release (aka press release) on allmediascotland.com. For more information, email here.