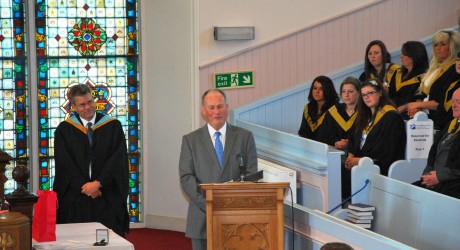 A CAITHNESS man has been recognised for his contribution to the University of the Highlands and Islands. Ronnie Taylor, 58, from Watten, was awarded the vice-chancellor’s medal at North Highland College UHI’s graduation ceremony on Saturday 15 September.

The award was introduced by University of the Highlands and Islands’ principal James Fraser last year to recognise “exceptional and outstanding contributions to the mission of the university”.

Ronnie was nominated for the medal by Dr Gordon Jenkins, principal of North Highland College UHI, for his long service and instrumental role in the development of land-based courses.

He joined North Highland College UHI, then known as Thurso Technical College, as an agriculture lecturer in in 1978.

On seeing a gap in provision, he devised new training programmes for the gamekeeping and land management sectors, helping to build the college’s reputation as one of the principal providers of such courses in Scotland and the UK.

Ronnie’s leadership skills were recognised when he was appointed as section leader for the college’s newly established gamekeeping department in 1994.

Three years later, his remit was extended to include equestrian and veterinary nursing programmes when he became section leader for land-based industries.

With the establishment of the prospective University of the Highlands and Islands in the early 1990s, Ronnie was pleased to contribute his expertise to strengthen its land-based curriculum.

He became UHI’s subject network leader for land based industries in 2003 and enjoyed a secondment as its acting dean of science and technology in 2010.

With a lifelong passion for golf, he was particularly proud to be involved in the creation and delivery of the university’s golf management degree, which continues to be provided through the North Highland College UHI campus in Dornoch.

Since retiring in 2011, Ronnie has been enjoying the outdoors first hand. He can often be found at Wick Golf Course where, as well as playing, he is the club secretary and also acts as a voluntary assistant to his son James, head green-keeper at the course.

Explaining why Ronnie was selected for the medal, James Fraser, principal and vice-chancellor of the University of the Highlands and Islands, said: “Ronnie Taylor created opportunities for students in land-based industries which have been transformational and has made North Highland College UHI a leading provider in Scotland. We are all delighted to mark his vision and leadership in this way.”

Dr Gordon Jenkins added: “Ronnie has had a long and distinguished career supporting students and supporting the growth and delivery of new and innovative programmes for both North Highland College UHI and the University of the Highlands and Islands. Ronnie, through his hard work and enthusiasm, has been an example to us all and I can think of no one more deserving of this award.”

Speaking about his award, Ronnie said: “It is a great honour for me to be awarded this medal and I feel extremely humbled. My success in developing and delivering land-based courses was due to a very enthusiastic, dedicated and committed team of individuals who I had the privilege to work with, sharing the same goal as myself in providing educational and, ultimately, employment opportunities for the young people of the Highlands and Islands.”

The University of the Highlands and Islands comprises 13 further and higher education colleges, specialist colleges and research institutions, distributed throughout the Highlands and Islands of Scotland. They are bound together through constitutional, management and academic structures, and co-ordinated through an executive office. Collectively, this is referred to as the UHI partnership.

There are currently over 7,500 students studying on undergraduate and postgraduate courses or undertaking postgraduate research with the university.