Media Release: Green’s the way for The Bay 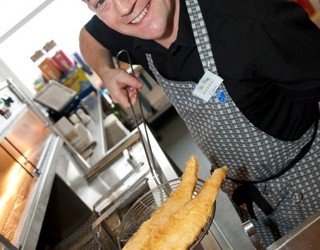 A NORTH-east fish and chip shop which is driven to becoming more environmentally efficient has battered off competition to be named a finalist in one of Scotland’s most prestigious environmental awards.

The Bay Fish and Chips of Stonehaven, Aberdeenshire, has been announced as one of four finalists at this year’s Scottish Green Awards in the category for Best Green Small Company.

The Green Awards recognises the achievements of individuals and businesses that have shown initiative in the reduction of their carbon and environmental footprints, which has had a positive effect on their surroundings and their business.

The multi-award winning chippy, which currently holds the crown as Scotland’s No1 fish & chip shop, has been highly recognised in the last year for its pledge towards sustainability and the environment.

The Bay has a three-star rating from the Sustainable Restaurant Association (SRA) placing them as one of the highest rated restaurants in the UK and earlier this year scooped the Environmental and Sustainability award at the Scotland Food and Drink Excellence awards.

The couple has a passion for their business and strive to promote fish and chips in the right way to move the industry forward. The Bay operates a zero waste management system.

Owner of The Bay, Calum Richardson, said: “We are delighted to have made it as a finalist at this year’s Green Awards as it truly affirms our drive to showcase the fish and chip industry in a positive manner.

“We’ve made a lot of effort to ensure we source the best produce for our customers, manage energy and waste the best we can, and play our part in the local community.

“We want The Bay to stand out in the industry so that other similar businesses can learn and follow in our footsteps to help work towards a more sustainable future.”

The winners of the awards will be announced at a dinner on Thursday October 4 at the Science Centre in Glasgow at a ceremony hosted by BBC broadcaster, Jackie Bird.