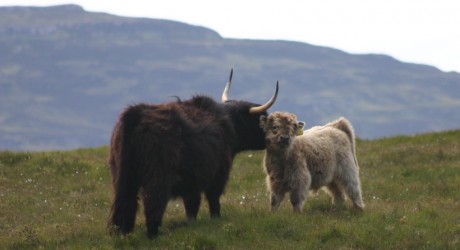 THE spring calving period on the Mull monitor farm has been reduced from four months in 2011 to just nine weeks in 2012, as a result of changes introduced in consultation with the community group.

At the recent open day attended by around 70 farmers and industry representatives, attendees heard that the 2012 calving also saw a ten per cent rise in calving percentage to 94 per cent and a ten per cent reduction in barren cows.

In 2011, calving stretched from late January until early June, with over half the cows calving more than ten weeks after the start of calving. This year, however, all the cows calved in nine weeks, with 90 per cent calving in the first six weeks.

At one of the initial farm meetings, Mr MacKay, who farms the unit on a five year Short Limited Duration tenancy, told the community group that his aim was to “develop an easily managed cattle enterprise, with a maximum of 60 functional and productive cows, based very much on commercial lines”.

Given the farm’s annual rainfall of over 120 inches of rain, he was keen to stick with the Highland breed due to their hardiness and foraging ability.

The best third of the fold are bred pure to produce replacements – four/five are required per annum. The remainder go to a Simmental bull, which has good Estimated Breeding Values (EBVs) for Ease of Calving and Milk.

The tighter calving provides numerous positives, including: easier management and sale batching of calves thanks to their uniformity; concentrated focus of labour at calving time, easier herd management as a result of cows being at the same stage, particularly for feeding during gestation and getting cows back in calf.

Mr MacKay reminded the group that later born calves are worth less at weaning than calves born at the start of calving. As an example he said a calf born in mid-May was approximately 30 kgs lighter at weaning in autumn than a calf born a month earlier. Given a value of £1.60 per kg, the younger calf would be worth £48 less at autumn weaning.

A number of changes had been made in order to achieve the tighter calving, resulting in ten per cent more calves. On such an extensive unit, this involved more than just taking the bull out after nine weeks.

“Previously the cows were bulled on the hill, with the bulls having to find the females over a large area. This was especially difficult for a new bull which was unfamiliar with the farm,” explained Mr MacKay.

“Now the cows are brought down to the in-bye for bulling, where they’re more confined, making the bull’s job a lot easier.”

Conception rates have been helped by close attention to cow nutrition. The forage (silage and roughage) is routinely analysed for minerals, ME (Metabolisable Energy), CP (Crude Protein) and trace elements, with emphasis on Phosphorus, which directly affects fertility.

Cows are on a rising plane of nutrition coming into bulling time, with minerals available from six weeks prior to bulling. Mr MacKay commented that calves at foot are also consuming the minerals intended for their dams.

The first half of the cows are calved on the hill, with the remaining 50 per cent brought down to in-bye.

“Calving and lambing are at the same time, so bringing the later calvers into a more controlled area saves hunting the hill for calving cows, when time is really short,” explained Mr MacKay, who currently does all the Torloisk work, other than tasks which demand additional hands, like hill gathering.

As expected the Simmental cross calves are bigger and around 35 per cent heavier than the pure Highland calves by six months of age and consequently the cross-bred steers are often more appealing to store buyers.

Elite Health status helps to ‘add value’ to both pedigree Highland and Simmental cross heifers. In 2011 Mr MacKay exported 18 pedigree females to Switzerland, at an average price of £1,800 per head. A further 10 females have been exported this year.

The cross-bred heifers, boosted by their health status, offer a number of sale options and are attracting premium-paying customers seeking either commercial breeding heifers, or embryo transplant recipients.

A further step to increase cattle productivity at Torloisk is being considered. “One of the biggest costs of pedigree Highland cattle is the maintenance of the replacement heifer,” explained Mr MacKay.

“Currently, by calving heifers for the first time at three years old, they’re five before there’s any financial return as nobody wants to buy a yearling Highland heifer.

“So I’m thinking about calving the replacement heifers at two years of age, to something like a Whitebred Shorthorn bull, to get an extra calf to sell a year earlier.

“Also, I run heifers with the bull for just six weeks which identifies the more naturally fertile heifers. By calving a year earlier, I’ll be able to cull the less fertile ones a year earlier.”

The community group recommends calving heifers a month earlier than the cows, to give them an extra month to recover and come into the herd the following year, as well as treating them well post-calving. They emphasised the importance of giving extra attention to any heifers calved at two years old.

The next Mull Monitor Farm meeting will be November 1, when the topic will be ‘Improving Cattle Enterprise Returns’.

For general information on monitor farms, plus detailed reports of meetings visit www.qmscotland.co.uk/monitorfarms