Media Release: Top of the shops for NE chipper 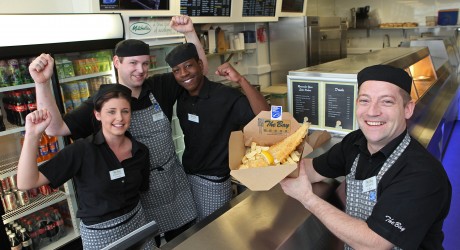 Multi award-winning The Bay Fish and Chips, based at Stonehaven, was today (Tuesday 25 September 2012) announced as the top chippy in Scotland and will now join nine other finalists from across the country vying to be named the best fish and chip shop in the UK.

The prestigious awards attract hundreds of applicants each year and are part of the National Fish & Chip Awards 2013 organised by Seafish.

The Bay was launched in 2006, by husband and wife team Calum and Lindsay Richardson who have both been previously awarded with Young Fish Frier of the Year. The chipper has been highly recognised in the last year for its pledge towards sustainability and the environment.

Says a spokesperson: “The Bay is leading the way for the fish and chip industry and recycles all its waste oil to bio diesel and all food waste to compost in turn lowering waste to landfill. The business is constantly sourcing new ideas to improve its productivity in an eco-friendly manner.”

Owner of The Bay, Calum Richardson, said: “We are thrilled to remain Scotland’s No1 fish and chip shop. It’s a massive achievement for the team and recognition of all their hard work over the last year. There are some great chippers across the country and to be up against them for the UK title is a credit to the business.”

The spokesperson added: “The Bay is the only fish and chip shop to gain a three star rating from the Sustainable Restaurant Association (SRA) placing them as one of the highest rated restaurants in the UK placing it alongside celebrity chef, Hugh Fearnley-Whittingstall’s two River Cottage establishments and Raymond Blanc’s multi-award winning Le Manoir Aux Quat’Saisons in Oxfordshire.”

The winners of the National Fish & Chip Awards will be announced at an awards ceremony at the Lancaster London Hotel, on 24 January 2013.

Issued by Frasermedia Ltd on behalf of The Bay Fish and Chips, Stonehaven.

MEDIA RELEASE posted by Frasermedia. You too can post media releases (aka press releases) on allmeidascotland.com. For more information, email here.