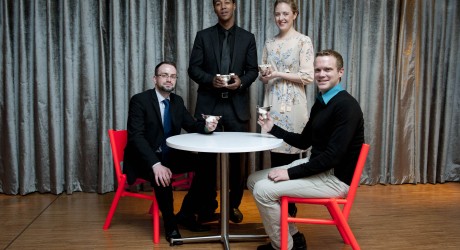 A YOUNG telemarketing entrepreneur and the founder of a pharmaceutical development company in Edinburgh, were among those to receive awards for their innovation and determination to succeed at an awards ceremony in Glasgow last night.

Now in its tenth year, the award scheme seeks to provide growth funding to Prince’s Trust Youth Business Scotland supported entrepreneurs between 18 and 31 who have been trading for at least one year and want to expand their business.

In 2010, Ross Tsakas was awarded a highly prestigious Enterprise Fellowship by the Royal Society of Edinburgh and Scottish Enterprise to commercialise his idea for a Single Vial System (SVS) for vaccines and other injectable pharmaceuticals.

The SVS was designed to address the inefficiencies that arise from having two vials, such as disposal, storage and increased risk of contamination.

On completion of the Royal Society of Edinburgh Fellowship, Mr Tsakas secured an Innovation Loan from the Prince’s Trust Youth Business Scotland and funding from the Cultural Enterprise Office’s Starter for Six programme.

More recently, he was awarded £100,000 from the Bill and Melinda Gates Foundation.

The device is now in its final stage of testing and with the help of the Prince’s Trust Youth Business Scotland’s mentoring programme, the company is marketing the device to potential customers and vaccine manufacturers.

The entrepreneur is committed to remaining in Scotland and has ambitions to create new jobs in healthcare and ensure Scotland’s reputation in Life Sciences continues to grow.

Steven Sibbald (26), founder of Springboard Europe Ltd also received an award for his determination to succeed. He started his business in June 2010 out of necessity, having been made redundant and experiencing difficulties finding work.

With two infant children and no savings or family help to fall back on, his prospects looked bleak so he decided to set up his own business to support his young family.

Trading originally from his daughter’s bedroom, Mr Sibbald now has a busy office in Princes Street in Edinburgh and employs four highly-trained members of staff who use their experience in telemarketing and digital channels to deliver new business opportunities for clients.

In the last two years, Springboard Europe has grown substantially, working with SMEs as well as world leading brands such as Coca Cola, Tom Tom Business and Motorola, generating client revenues in excess of £5million.

Diane Houston (31), founded luxury lingerie and sleepwear company, Gilda & Pearl in April 2009 with the help of financial assistance from PSYBT.

Ms Houston has established a lingerie brand which sells through a network of boutiques and fulfilment websites throughout the world.

In 2010, she successfully applied to the Growth Fund to help increase production and raise the profile of the brand by investing in photo shoots and attending trade shows in London, Paris and New York.

This has led to extensive press coverage which is helping to increase sales in the UK, China, Japan, the US and Australia.

With a funding package comprising savings, borrowings and a loan and grants from Youth Business Scotland and Business Gateway, the entrepreneur launched Little Devils Direct five years ago.

A Growth Fund Accelerator Loan in 2010 to provide some working capital enabled the business to expand further.

His ethos is to provide top quality baby and infant products at affordable prices.

Every range of products he sells is fully vetted and exceeds British Standards and as well as online sales, Little Devils Direct is now also supplying retail outlets.

The company employs four staff and a number of casual workers at a 7000sf ft warehouse in the East End of Glasgow and has a turnover in excess of £400k.

Congratulating the winners Geoff Leask, director at the Prince’s Trust Youth Business Scotland, said: “The Growth Fund has been a huge success for the companies involved.

The loans have helped to attract further support, allowing the young entrepreneurs to benefit from enhanced funding packages for expansion plans.

Our winners have demonstrated outstanding courage, determination and success and we congratulate them on their achievements.”

An investment of £2.67 million since the introduction of the Growth Fund programme in 2002 has enabled the Fund to make 243 Awards to 213 businesses who have gone on to create 309 jobs. 75 percent of businesses continue to trade to this day.

The Growth Fund award scheme was launched in 2002 thanks to an initial pledge of £125,000 from Sir Tom Hunter and further backing from Scottish Enterprise, the Highlands and Islands Enterprise, ERDF and private donations.

MEDIA RELEASE posted by Panache Communications. You too can post media releases (aka press releases) on allmeidascotland.com. For more information, email here.