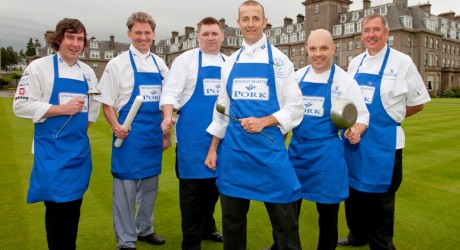 A TEAM of top chefs from Scotland will be among 45 nations from around the world competing in the ‘Culinary Olympics’ at the IKA show in Erfurt, Germany, next month.

The chefs have chosen Specially Selected Pork fillet and cheek as their main course ingredients in a menu carefully constructed by the team who aim to showcase the very best of Scottish hospitality and cuisine.

The team of six Scots, with an eight-strong back-up team, were this week making the final preparations to travel to the event, which runs from October 5 – 10.

Says a spokesperson: “The show, which takes place in true Olympian style every four years, first took place in Frankfurt in 1900 and is now regarded as the biggest, most traditional culinary exhibition and the hotspot for cooks and patissiers worldwide.

“The Federation of Chefs Scotland is co-ordinating the team of chefs from all sectors of the Scottish hospitality industry.

“The chefs will have their skills and nerves tested fully amid the frenzied atmosphere of the event, which sees nine kitchens running simultaneously.”

The main course dish they will be challenged to perfect for 110 diners is Ayrshire pork fillet with Stornoway black pudding and spiced apricot, wrapped in smoked ham slow-cooked pork cheek, butternut squash, nutty cabbage with pancetta and caraway, mushroom and lentil tartlet, with braising juices.

“We are delighted Team Scotland have chosen to showcase Specially Selected Pork as the centrepiece for their Olympics menu and we wish them every success in Germany,” said Jim McLaren, chair of Quality Meat Scotland.

“This appreciation, by some of the most discerning palates in the country, of the tastiness and versatility of our quality assured pork which is produced to some of the highest welfare standards in the world, sends a very positive signal to our industry.

“This builds on recent market research which indicates that consumer demand for Specially Selected Pork is steadily growing and several major retailers have also increased their commitment to sourcing and clearly labelling specially selected pork in recent months.”

Mr McLaren added: “Scotland’s pig farmers are showing their long-term commitment through initiatives such as the newly-launched Scottish Pig Academy to encourage and develop apprentices. They have also invested around £13 million in improvements on Scottish pig farms in the past 12 months.”

Rural Affairs Secretary, Richard Lochhead, said: “Scots were successful at the recent Olympics and Paralympics and I’m sure that our chefs will continue to fly the flag for Scotland at the Culinary Olympics.

“We produce some of the world’s finest natural ingredients and I’m sure that any menu of Scottish produce – on this occasion with Specially Selected Pork as its centrepiece – is sure to be a winner. I’d like to wish Team Scotland all the best for their trip to Germany.”

MEDIA RELEASE posted by Quality Meat Scotland. You too can post media releases (aka press releases) on allmeidascotland.com. For more information, email here.