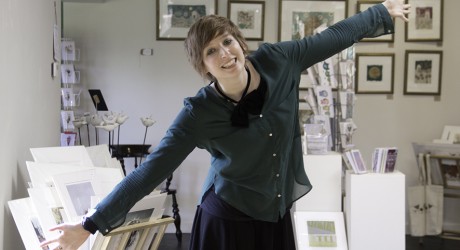 ONE OF Aberdeenshire’s largest art and craft galleries has appointed a new member of staff to manage its exhibitions and gallery space.

Jenni Colquhoun has joined the team at Touched by Scotland, located in Oyne, as gallery manager.

Jenni is a graduate of Duncan of Jordanstone College of Art in Dundee, holding two degrees: a BA (Hons) in Animation and an MSc in Medical Art. She has more than seven years of artistic experience.

In her new role, Jenni will be responsible for running the gallery and retail space, as well as maintaining relationships with the artists and crafters.

She will also be responsible for planning and organising the gallery’s exhibitions.

A talented artist herself, Jenni has experience in a range of media, and has been commissioned for multiple projects, including the design of a sculpture that was part of an installation in Edinburgh and creating a 3D animation for use as a visual aid at Cambridge University.

Jenni wants to put her own artistic stamp on Touched by Scotland, and hopes to exhibit some of her ownwork alongside the area’s most exciting new artists’ pieces.

Prior to joining the team at Touched by Scotland, Jenni learned the art of display by creating counter and window displays whilst working for localretailers. She also worked as a waitress at the gallery’s adjoining restaurant, Gadie’s.

Jenni said: “Working at Touched by Scotland is brilliant. I am so inspired being around this much fantastic artwork, and it’s wonderful being able to put my creative background to good use.

“I particularly love that part of my job involves visiting artists in their studios – I think it’s fascinating to see how and where people create, and it is wonderful to be able to give thehistory of a piece when I am showing it to customers at the gallery and gift shop.”

Jan Hobbs, co-owner of Touched by Scotland, said: “Jenni has a wealth of experience and a talented eye that makes her a natural fit in our gallery. We look forward to displaying some of her own original work as well.”

Issued by Frasermedia Ltd on behalf of Touched by Scotland