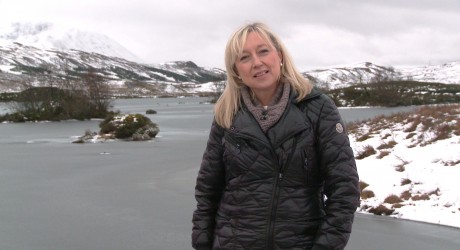 CAPTURING the essence of Scotland’s landscape has been a vital aspect of many of the nation’s most treasured literary gems.

The importance of this backdrop in the work of one of Scotland’s best-loved authors, Robert Louis Stevenson, is evident as Cathy MacDonald finds out in the second programme of a new BBC ALBA series.

In this edition of Sàr-Sgeòil (Classic Tales), Cathy follows in the footsteps of David Balfour – hero of Stevenson’s Kidnapped – in his flight through the heather in the company of the Jacobite rebel, Alan Breck Stewart.

Says a spokesperson: “Cathy discovers that Stevenson not only drew on his intimate knowledge of the Scottish landscape in the creation of this classic tale, but on his wide knowledge of Jacobite history.

“The murder of ‘the Red Fox’ – Colin Roy of Glenure – is a historic fact, and many of the characters, including Alan Breck, were real people.

“We see Cathy follow the trail of the fictitious Balfour through the very real history and geography of Scotland.

“At South Queensferry, she visits the very inn where David is kidnapped so that his wicked uncle can steal his inheritance.

“On the island of Erraid, off Mull, Cathy finds the shore where David is washed up after the ship he is held captive on is wrecked.

“As an apprentice to his lighthouse engineer father, the young Stevenson had visited Erraid, and drew on his memories of it for his great novel.

“Cathy goes on to explore Appin, the scene of the Red Fox’s murder, and Glencoe, where David and Alan Breck flee from the Redcoats who are hunting them, believing them to be the murderers.

“Cathy’s journey – and the novel – ends near Edinburgh, where David Balfour’s quest for justice, and Alan Breck’s flight for freedom, ends.”

The spokesperson adds: “Although Stevenson was a lowland Presbyterian, we soon discover that his treatment of Highlanders and Jacobites in Kidnapped is deeply sympathetic – something that may not have been instantly expected from a novel set in the mid-18th century.”

Sàr-Sgeòil (Classic Tales), produced by Caledonia TV, can be seen on BBC ALBA on tonight (Thursday 27 September) from 8.30pm.