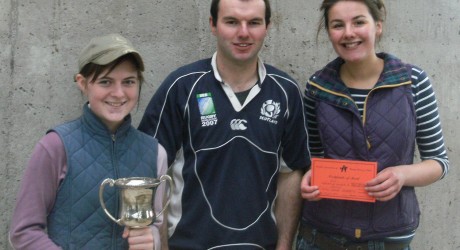 The event at Westfield, one of the network of monitor farms led by Quality Meat Scotland, attracted around 80 attendees to the 220-hectare farm, near Thurso.

The open day included an open stock-judging competition which was divided into two classes of cattle and four classes of sheep.

Caithness District Young Farmers also held their summer stock-judging competition at the event, with the individual prize won by Stuart Mackay, and the team honours taken by Halkirk A with a  team comprised of John Anderson, Fiona Sinclair and Megan Bremner.

The Royal Highland Education Trust (RHET) was on hand to keep the younger attendees occupied. Among the activities aimed at children were ‘milking’ a life-size model cow, making butter and crushing barley.

A very well-received veterinary workshop on sheep foot problems was run by Thurso vet, Sinclair Manson of DS MacGregor & Partners. There was also a sheep race and equipment demonstration.

The day finished with a charity auction, conducted by John Bremner of Aberdeen and Northern Marts, which comprised of ten prizes including: a hamper of homemade produce; 20 small bales of hay; a bottle of Old Putney Malt; and four hours of slave work provided by SAC facilitator Willie Budge.

With the proceeds from the charity auction added to the stock-judging competition and some other generous donations, an impressive sum of £2,000 was raised for Macmillian Cancer support.

“We were delighted with the turnout on the afternoon and the generosity of all the attendees,” said John Mackenzie, monitor farmer.

“We tried to organise a programme which appealed to farmers, the general public and kids. To raise £2,000 for Macmillian Cancer Support was just fantastic.”

Macmillan’s fundraising manager for Highlands, Andrew Benjamin, said: “We are really grateful to John Mackenzie and all the people that attended the open day. It’s a fantastic amount of money raised and will help us to continue providing the much needed support to people affected by cancer.

“Sadly, the number of people being diagnosed with cancer is increasing every year and that means Macmillan’s support for people living with cancer is in more demand than ever. Every pound raised by John and those that attended helps us be there for someone with cancer when they need us most.”