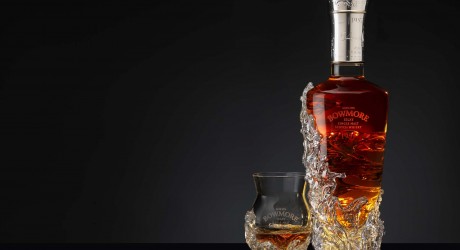 TWO renowned Scottish glass artists, based in the royal burgh of Tain, Ross-shire, have completed a unique order for one of the world’s finest whisky distillers.

Not only is Bowmore 1957 the oldest whisky the distillery has ever released, it is also the oldest Islay single malt ever put on sale.

Only 12 bottles will be created, with the first two going up for sale at auction in London and New York, with all proceeds donated to five Scottish charities.

A further two have been retained for the Morrison Bowmore archives and the remaining eight will be available for sale at the Bowmore Distillery.

The retail price for Bowmore 1957 from the Distillery will be £100,000 (approx. $155,000), also the record-breaking reserve price set by auctioneers Bonhams for the London and New York events.

Glasstorm are fast becoming both experts and pioneers in the niche field of luxury bottle creation.

The bottles have been beautifully hand-blown and sculpted into the shape of the waves reminiscent of those that constantly crash the sea walls of Bowmores’s legendary No. 1 Vault, the oldest maturation warehouse in Scotland.

The glass has also been flecked with platinum to create a shimmering sea-like effect.

Development agency Highlands and Islands Enterprise (HIE) has been working closely with Glasstorm for several years.

Jenni said: “Brodie and Nicky have developed a well-deserved reputation in the whisky industry in particular for creating stunning designs.

“This latest commission for Bowmore will be viewed worldwide and has the potential to firmly establish them as leading specialists in glassmaking.

“They are currently taking part in Scottish Development International’s Export Explorer programme and we are delighted to be able to support them as they continue to grow.”

The small vibrant creative team at Glasstorm specialise in creating bespoke works in glass for the commercial drinks, film and architectural industries, as well as working with private clients, and are going from strength to strength.

“We can really identify with the craftsmanship it takes to produce this special dram and translate that to the craft of glassmaking,” said Glasstorm’s Nicky Burns.

“Last year we made the Glenfiddich Janet Sheed Roberts bottle, a very rare reserve. That reached the then-record price of £60,000, which Bowmore 1957 is expected to beat. It is great to hear that the proceeds from this Bowmore will go to five Scottish charities,” she continued.

The project is a collaboration between one of the world’s finest whisky makers and a creative team of artists.

In addition to Glasstorm, the team included woodworker Peter Toaig, who fashioned the stunning presentation box, and royal warrant holder Hamilton and Inches, who hand engraved the platinum neck and stopper.

“We are delighted and honoured to be involved in this highly prestigious project,” added Brodie Nairn.

“It’s amazing to think that someone may look at this work in 100 years from now and still see the beauty. It certainly would be interesting to know if the seal had been broken.”

Martin Green, Bonhams’ whisky specialist, said: “We at Bonhams are very excited to offer at auction the rarest and oldest expression of Bowmore.

“This iconic bottling, the most mature spirit ever to come from Islay, has been watched over for 54 years and is in impeccable condition.”

Mike Keiller, Morrison Bowmore Distillers chief executive officer, said: “The notion of having a cask from 1957 that can still produce something so glorious shows the acute attention to detail and care that we pride ourselves on at Morrison Bowmore.

“The fact that we can take some of the precious cargo from this cask to help the lives of so many across many different communities through our charitable contribution, we thought we should help Scottish charities with this rare piece of Scotch whisky history.”

There are also four clips of the making of this very special bottle the crafts people involved and the whisky on this youtube channel:

For more information on Glasstorm and their work go to www.glasstorm.com

Inquiries regarding bidding can be directed to bids@bonhams.com. The minimum reserve set by Bonhams is a cool £100,000 per bottle, the highest reserve ever set for a Single Malt Whisky.

Morrison Bowmore Distillers, producers of Bowmore, have chosen to donate all the net proceeds of both auctions to five Scottish charities that encompass a variety of worthy causes: ALZHEIMER SCOTLAND (care for people with dementia, their caregivers and families); THE BEATSON ONCOLOGY CENTRE (care for cancer patients receiving treatment in the west of Scotland); CHAS (children’s hospice services); ERSKINE (medical care for Armed Forces); and MARIE CURIE CANCER CARE (cancer care and research).