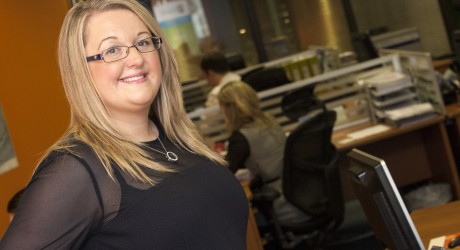 A LEADING North-east recruitment agency has appointed a new managing director to lead the business through continued growth and expansion.

Wendy Marr has become a shareholding director of Genesis Personnel, which has offices in Aberdeen and Peterhead, following seven years with thefirm.

Mrs Marr joined Genesis Personnel in 2005 after a ten-year career in the seafood industry in Peterhead.

She started at the firm as a trainee recruiter moving up through the ranks to assistant manager prior to her recent promotion to managing director.

The employment agency, which currently has 15 members of staff, was launched in 1975 and provides onshore and offshore recruitment solutions toclients across the world in a range of sectors including marine, industrial, commercial, driving, legal and oil and gas.

The firm has an international client base providing permanent, temporary and contract-based personnel.

Mrs Marr takes over the role from fellow director, Anna Eardley, who has led the business since 1998.

Mrs Marr said: “Both businesses are growing rapidly and require separate managing directors so I agreed to take on the role following the share purchase to allow Anna to concentrate her expertise on the property business.

“I’m actively involved in the day-to-day running of Genesis Personnel which allows me to understand and visualise how to further expand our share of the market in the North-east.”

Fellow director, Ms Eardley, said: “Wendy has been with Genesis Personnel for seven years and her focus, ambition and determination has resulted in her accelerated career progression within the business.

“Her work ethic is commendable and her passion for recruitment and customer service gives her the perfect attributes to lead both the Genesis team and the business to a bright and exciting future.”

As part of the restructure, former office manager at Genesis Personnel, Paula Duthie, has also become a shareholding director.  Mrs Marr lives near Peterhead with her husband and young daughter.

Issued by Frasermedia Ltd on behalf of Genesis Personnel Ltd