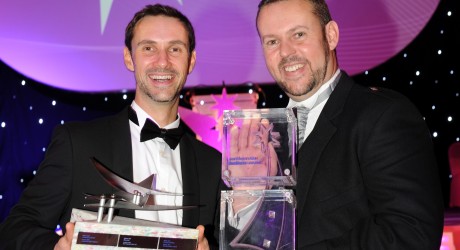 A NORTH-east organics recycling firm has scooped a double win in one of Aberdeen’s most high profile business awards.

The firm, which recycles food and garden waste into BSI (British Standard) accredited compost at an award winning £5million facility at New Deer in Aberdeenshire, faced tough competition to secure the winning title.

The small business category recognised the firm for its excellent practice and for being an inspiration to all small businesses attaining market prominence.

The event, which is one of Scotland’s biggest award ceremonies, had 38 finalists across 13 categories and was attended by around 840 guests.

The firm, run by brothers Grant and Gregor Keenan, was launched in 2001 and has grown to become one of the largest facilities of its kind in the world.

The organics recycling company deals with tens of thousands of tonnes of food and green waste from local authorities all over Scotland and also offers a recycling service to businesses and food processors with green targets.

The commercial collection scheme was the first of its kind in the North-east allowing local organisations to recycle items such as leftover food, coffee grounds, cups and paper towels.

Managing director of Keenan Recycling, Grant Keenan said: “We are absolutely overwhelmed to have won two Northern Star awards at one of the North-east’s most high profile business events.

“It was such a great surprise and a great honour for the business to be recognised by the Chamber.

“We have received a great deal of local support and funding since launching the business which has helped us achieve and exceed our targets to grow a business to support the local economy, employment and safeguard the environment for future generations.”

Robert Collier, chief executive of Aberdeen & Grampian Chamber of Commerce, said: “Keenan Recycling impressed the judges as a successful small business and one which is making a significant contribution to the environment through its work.

“The company is a great example of the drive and innovation that makes the North-east a major business region.

“We were delighted to recognise the firm’s talent and ambition with both the Green Business and Overall Small Business awards.”