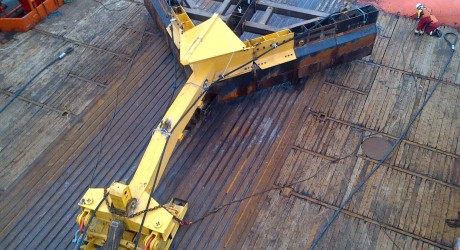 ECOSSE Subsea Systems has completed a major seabed clearance project on the Laggan-Tormore project west of Shetland on behalf of TOTAL E&P Ltd and its partner DONG E&P (UK) Ltd.

The Aberdeen subsea technology company deployed its SCAR1 trenching tool to remove up to 1,000 boulders which were delaying progress on cable laying and umbilical installation work.

The SCAR1 cut a ten-metre wide swathe over a 67km route, displacing boulders up to two metres in diameter and removing soil to leave a flat seabed for pipe laying to commence.

Typically, seabed clearance is done using a ‘boulder grab’ device and is a slow process as it displaces rocks one by one, with operators reluctant to tackle boulders larger than a half metre in size.

The SCAR system was originally developed as a subsea plough but was redesigned and fabricated to suit TOTAL’s requirements and mobilised within a ten day window.

The clearing plough worked at depths of 640 metres, believed to be a record for this type of equipment, and at optimum performance was clearing up to 1,000 metres of seabed per hour.

Ecosse Subsea Systems managing director, Mike Wilson, said he hoped the success of the project has created a fresh solution for other exploration companies faced with complex seabed clearance issues.

He said: “Boulder clearance during seabed preparation is a real problem for some operators and is so arduous and expensive that often they opt to move the route of the pipeline. Our method, including preparation, vessel charter and deployment is considerably less expensive than the traditional alternative methods.

“Our SCAR system is extremely robust, easily mobilised, can work in the harshest environments and in up to depths of 3,000 metres.

“The success of this project has demonstrated there is a much more efficient and less costly way of tackling seabed clearance and we anticipate this will lead to work on similar projects in the North Sea and other major oil and gas producing regions.”

Ecosse Subsea Systems Ltd was established in Aberdeen in 1996 and specialises in offshore engineering consultancy and subsea technology for the subsea energy and offshore renewables markets.

In partnership with other innovation-led companies, Ecosse Subsea Systems has developed a range of patented technologies, with other patents pending, in pipe lay and spooling, wave energy conversion and subsea lifting.

Issued on behalf of Ecosse Subsea Systems Ltd by Sure Public Relations. For further information please contact Stephen Rafferty on +44 (0)7980 598764 or email moreinfo@surepr.co.uk