Media Release: Diners urged to tuck in and vote for the city’s best restaurants 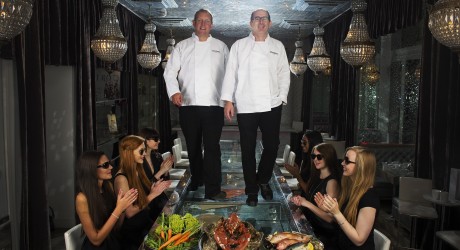 WITH just under a week left to vote for Glasgow’s favourite restaurants, things are hotting up in the city’s kitchens.

Already, almost 9,000 votes have been cast by members of the public in the Glasgow Restaurant Awards and organisers are expecting a huge rush of support before voting ends on Monday, October 22.

The awards, which are organised by the Glasgow Restaurant Association (GRA) in association with Glasgow: Scotland with Style ran in 2010 where over 16,000 votes were cast.

This year promises to be even bigger, boasting 19 categories of which 11 are voted for by the public, including; best new restaurant, Italian and breakfast.

This year, the awards have been expanded to take in eight new categories, including Best Maitre D’, Family Dining and Posh Nosh as well as the new Sprit of Glasgow award, which aims to recognise the extra mile that some in the culinary trade go to for the public.

GRA chair, Ryan James, said: “Glasgow has a lively restaurant scene, representing countries from all over the world. This is the public’s opportunity to let us know who their favourites are by voting online.

“Despite difficult economic times, Glasgow continues to open new restaurants each week. These awards are important in recognising the high quality of venues, food and staff that are abound in the city.

“Glasgow has an enviable reputation as a premier dining destination and last year was recognised by industry travel bible, Lonely Planet, as the best and most eclectic dining city in Europe.

“The Glasgow Restaurant Awards recognise and reward the extraordinary, skilled and exciting restaurants and restaurateurs from our city.”

Stuart Patrick, chief executive of Glasgow Chamber of Commerce, added: “The Glasgow Restaurant Awards reinforce the exceptional culinary standard and wealth of choice that exists in the city.

“Glasgow is Scotland’s friendliest and most stylish city and enjoys an enviable reputation as a European centre of dining excellence, offering some of the highest levels of service.

“Glasgow is home to some of the most skilled professionals in the industry and these awards play a key role in profiling this exceptional talent.

“This year, there are even more categories for the public to cast their vote and have their say. The restaurant industry accounts for thousands of jobs in Glasgow, and it is important that the city’s talent is recognised.”

After voting closes on Monday October 22, the three venues with the highest votes in each category will be visited by members of the judging panel.

The awards ceremony will be held at the Citizen’s Theatre in Glasgow on Monday, December 10.

Over 450 guests, including the finalists of each category, are expected to be in attendance at the event, which is to be hosted by Michelle McManus.

Votes can be cast at www.glasgowrestaurantawards.com