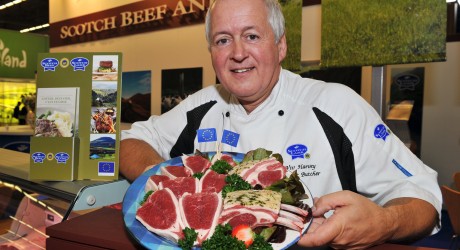 SCOTLAND’S meat exporters will be flying the flag for Scotch Beef, Scotch Lamb and Specially Selected Pork in Paris next week at SIAL – considered one of the world’s most influential food fairs.

Quality Meat Scotland is leading a group of a dozen exporters to the SIAL food fair, taking place between 21-25 October, to promote Scotch Beef, Scotch Lamb and Specially Selected Pork and the guarantees of quality, traceability and the highest standards of animal husbandry and welfare that come with these brands.

Says a spokesperson: “The trade-only show attracts around 140,000 visitors from nearly 100 countries over its five days and is generally accepted as the place to meet many of Europe’s most important buyers.

“Exporters will be joined by QMS staff and its European agents to promote the Scottish red meat industry and highlight the PGI marque to buyers and traders from across the globe.”

QMS head of marketing, Laurent Vernet, said: “All the world’s meat exporting nations will be attending SIAL next week. It is therefore critically important that Scotland’s exporters have a strong presence at the show, highlighting and explaining what makes Scotch Beef, Scotch Lamb and Specially Selected Pork different and desirable to customers.

Caption: Master Butcher, Viv Harvey, will be on duty throughout the fair to prepare meat for display and hospitality purposes.