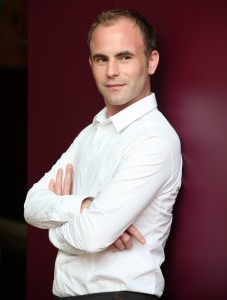 THE chair of the board of directors of the National Theatre of Scotland, Richard Findlay, today announced that Laurie Sansom will become the new artistic director of the company.

Mr Sansom will succeed Vicky Featherstone who leaves post in December 2012 to join the Royal Court Theatre in London.

Laurie Sansom is currently the artistic director of Royal & Derngate, Northampton, and has a growing and vibrant international track record as a director and programmer.

The work he has produced and directed at the venue has gained the theatre a national reputation for excellence.

The company won the inaugural Stage Award of ‘Regional Theatre of the Year’ in 2010 and was named “the most exciting regional theatre of the decade” by The Guardian’s Michael Billington.

Prior to taking up post in Northampton in 2006, Laurie was, for four years, Alan Ayckbourn’s associate director at the Stephen Joseph Theatre in Scarborough where he developed and directed over 20 new plays.

Richard Findlay comments: “I am thrilled that Laurie Sansom will become the second artistic director of our national theatre.

“The board was unanimous in its selection of Laurie from a strong field of candidates. The net was spread across the UK and overseas so we had a wide and highly-talented field to choose from.

“The National Theatre of Scotland has been a great success story for Scotland and Scottish theatre; in a very short time we have firmly established ourselves as a major force for pioneering and exciting work which we have taken to all corners of the country and across the world.

“The baton that Laurie receives from Vicky Featherstone is one that is richly endowed, giving him a superb opportunity to take the company to new heights and achievements.

“He inherits a strong team to help him do that and I have little doubt that in his first full season he will surprise and delight us all.”

Laurie Sansom says: “It is a thrilling challenge to lead the National Theatre of Scotland through the next stage of its development as it continues to champion new and innovative work in Scotland and beyond.

“The company’s unique ‘theatre without walls’ policy means it can continue to be truly responsive to artistic ambition and a diversity of voices.

“I am looking forward to working with the many artists, companies and venues producing ground-breaking work throughout the country, and confirming Scotland as the most exciting place to make and experience theatre in the UK.

“Although it will be difficult to say goodbye to everyone at Royal & Derngate, the diversity of the work the National Theatre of Scotland is able to produce, and the strategic role the company plays in developing artists, means it is a wonderful opportunity as both a director and programmer.”

Laurie Sansom, aged 40, has been artistic director of Royal & Derngate, Northampton since 2006. Prior to this, he was associate director to Alan Ayckbourn at the Stephen Joseph Theatre, Scarborough from 2002 to 2006. He was an Arts Council England trainee director at the Palace Theatre, Watford from 1996 to 1997 and has a First Class MA in English from Jesus College Cambridge (1991-1994).

His productions at Royal & Derngate, Northampton include Spring Storm by Tennessee Williams and Beyond the Horizon by Eugene O’Neill (TMA Award, Best Director) which transferred to the National Theatre (London) and for which he received a Best Director nomination in the Evening Standard Awards, Frankenstein (with Frantic Assembly), The Duchess of Malfi and Follies. The Bacchae by Euripides, in a new version by Rosanna Lowe, Blood Wedding by Federico García Lorca, in a new version by Tommy Murphy, and Hedda Gabler by Henrik Ibsen, in a new version by Andrew Upton, were recently presented as The Festival of Chaos, as part of London2012 Festival.

At the Stephen Joseph Theatre, he directed over 20 new plays including Villette (with Frantic Assembly) and a micro-musical season comprising three new musicals.

In 2009, Royal & Derngate’s production of The Prime of Miss Jean Brodie was presented at the Edinburgh Festival Fringe winning the lead actress, Anna Francolini, the TMA Award for Best Performance in a Play.

Laurie Sansom will join the National Theatre of Scotland in spring 2013.

As one of Scotland’s five national performing companies, the National Theatre of Scotland is funded directly by the Scottish Government and will be awarded £4.4m of core funding in 2012/13.  The company’s total annual turnover in 2011/12 was £6.1m.  It has a permanent core staff of 41, and employs or engages over 600 performers, stage managers, technicians and other practitioners during each year.

Since its launch in February 2006, the National Theatre of Scotland has been involved in creating 186 productions in 156 different locations. With no building of its own, the company takes theatre all over Scotland and beyond, working with existing and new venues and companies to create and tour theatre of the highest quality. It takes place in the great buildings of Scotland, but also in site-specific locations, airports and tower blocks, community halls and drill halls, ferries and forests. The company has performed to over 810,000 people across three continents.

In Scotland:  Glasgow Girls, a new musical, will open in Glasgow at the Citizens Theatre on 31st October and The Guid Sisters opens at the King’s Theatre, Glasgow on 23rd October, in a co-production with the Royal Lyceum Theatre. Lifeguard, in a co-production with the Arches is playing in Govanhill Baths, Glasgow and there are currently large-scale National Theatre of Scotland community theatre projects running in Glasgow, Fife and Shetland.

UK touring:  The National Theatre of Scotland and London Review of Book’s production of Enquirer opens in Belfast on Friday 26th October and Beautiful Burnout, in a co-production with Frantic Assembly, is currently touring the UK.

International touring: The company is currently touring the internationally renowned Black Watch, marking, on 26th October 2012, the National Theatre of Scotland’s Asian premiere with performances in Seoul, South Korea.  The Monster in the Hall, which is touring the UK with Yellow Moon this autumn, will play in Shanghai as part of a Chinese tour later in October. The Strange Undoing of Prudencia Hart is also touring internationally this season and is currently playing in Chicago.

The company’s 2013 season announcement can be read here:

Highlights of the 2013 programme include:

Let The Right One In, a stage adaptation by Jack Thorne based on the novel and screenplay of the cult Swedish romantic horror film by John Ajvide Lindquist, directed by John Tiffany and with associate direction by Steven Hoggett.  At Dundee Rep Theatre from 6th to 29th June 2013.  A National Theatre of Scotland and Marla Rubin Productions Ltd co-production in association with Dundee Rep Theatre.

Ignition, an ambitious site-specific production that explores the impact cars and fuel have on island life.  Wils Wilson leads a creative team to inspire the whole of Shetland to take part. Ignition is presented by the National Theatre of Scotland in association with Shetland Arts. Supported by Creative Scotland’s First in a Lifetime Fund.  Community activities ongoing from October 2012, culminating in performances in March 2013.

David Greig’s majestic sequel to Macbeth returns to tour the UK from August 2013. The National Theatre of Scotland and the Royal Shakespeare Company’s production of Dunsinane is touring to Eden Court, Inverness, His Majesty’s Theatre,  Aberdeen, Theatre Royal Glasgow, Kings Theatre, Edinburgh and further UK dates to be announced.