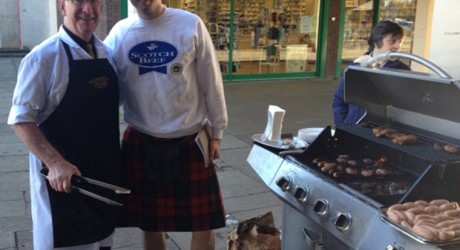 AN award-winning Master Butcher, who takes great pride in being a member of Quality Meat Scotland’s Scotch Butchers Club, is celebrating 50 years in the butchery trade.

Alex, who has had a distinguished and successful career, started working as a trainee butcher in Barrhead, Glasgow and attended evening classes, gaining his butchery diploma in 1962.

After graduating he worked at Stewart Brothers, Glasgow and then moved to Applied Supplier as the manager of their first supermarket in Glasgow’s Oswald Street. Latterly, he became manager of their larger Galbraith Butchery Department in Dumbarton.

He then took up a position with his previous employer Stewart Brothers as a supervisor to cover the east coast region of Scotland.

Alex then moved to Alex Munro, a butchers shop based in Kirkcaldy’s Mercat Centre and a few years later was asked to manage the Kingdom Centre store in Glenrothes. During this time he won The Master Butcher of the Year competition and was crowned The Master Poultryman of the Year.

In 1989, Alex and Margaret opened their own store in Glenrothes, founding Alex Mitchell Butchers.

Today, Alex employs around 15 members of staff and, at the age of 71, is showing no signs of retiring.

“Margaret and I have worked hard over the years developing Alex Mitchell Butchers into the thriving, well-respected, award winning business that it’s known for today,” said Alex.

“Throughout my career in the butchery industry, I’ve had a real passion for my work and have been committed to achieving excellence. I’m sure some of my past and present staff members will say that I’m a bit of a stickler for perfection!

“I have thoroughly enjoyed every moment of my career and am looking forward to what the future holds.”

Jack Broussine, QMS marketing executive, said: “Alex is a respected figure throughout the Scottish butchering fraternity and is a fantastic ambassador of the Scotch Butchers Club.

“As an award-winning Master Butcher, Alex has a wealth of experience which he is passing on to young butchers whilst teaching them a trade and inspiring them to become the best they can be.”