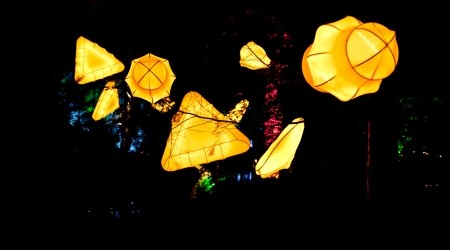 THE Enchanted Forest, a Perthshire Big Tree Country event, has been shortlisted as a finalist for the 2012 Year of Creative Scotland Event at this year’s Creative Scotland Awards which will be held in Glasgow on Thursday 13th December.

The shortlist, due to be released by the awards organisers next week, is currently shrouded in an air of creative mystery but is expected to be a glittering array of all that is best in Scotland’s creative sector covering not just events, but film, literature, theatre, dance, music and education.

“This year’s show was a truly collaborative approach involving a creative team that spanned lighting design, musical composition, and the visual arts and as a team we are very grateful to Creative Scotland for their support in helping us to continue to develop the artistic integrity of the event which has been recognised in this award nomination.”

The Enchanted Forest is no stranger to awards success, topping the charts at the Scottish Event Awards in 2011 with the Event Management Grand Prix not to mention the accolades for Best Cultural Event, Perthshire’s Best Event and clocking up numerous other awards along the way.

In 2012, in its tenth anniversary year, this Big Tree Country event smashed through the 30,000 visitors barrier for the first time since the event began, contributing an estimated £1.5million to the local Highland Perthshire economy over its 24-night run.

This latest news comes just four days before the event goes head to head with some of Scotland’s biggest tourism operators at this year’s Thistle Awards for the coveted title of VisitBritain Marketing Campaign of the Year.

For further information about the Enchanted Forest visit www.enchantedforest.org.uk.