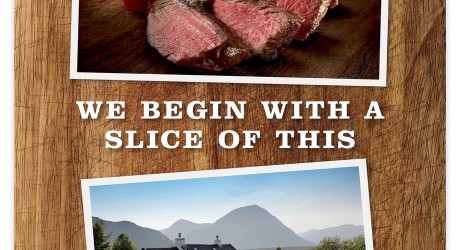 THE growing trend for consumers to search for recipes using iPads and iPhones has prompted Quality Meat Scotland (QMS) to place unprecedented focus on digital media in its latest Scotch Beef campaign.

The campaign also features two eye-catching new adverts which combine food and landscape imagery to encourage consumers to think about what makes Scotch Beef special in both its production and taste.

The campaign will run throughout Scotland for the month of November and is part of a £700,000 Scotch Beef spend, part-financed by the European Commission, which will major on GB-wide activity with a London focus in February and March 2013.

The activity this month includes traditional advertising at strategic billboard locations as well as newspapers and magazines but, in response to QMS consumer research, will also include on-line advertising targeted to reach key consumer audiences.

The timing of the two campaigns, November followed by February and March, was decided on following feedback from the wider industry and is aimed at driving awareness at times when consumer demand traditionally eases.

“The November Scotch Beef campaign will be complemented by direct marketing activity in the first week of December.

“This will focus on encouraging people to have Scotch Beef and Scotch Lamb for Christmas dinner,” said Suzie Carlaw, QMS marketing controller.