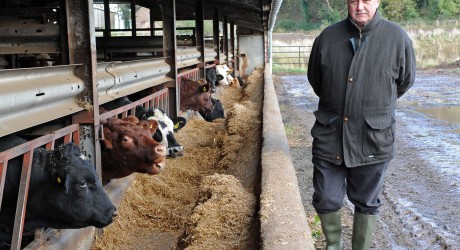 ONE of Britain’s most successful chefs, Brian Turner CBE, has described the three finalists in the debut Scotch Beef Farm of the Year Award as “dedicated, focused and experts in their field”.

The three finalists were unveiled today (Thursday 8th November) by AgriScot and Quality Meat Scotland who launched their search for Scotland’s top beef farm in July this year.

The farms are Perthshire-based Netherton Farm near Auchterarder, run by the McLaren family; East Lothian-based Cairndinnis Farm, near Haddington, run by Euan Smith; and Roxburghshire-based Upper Nisbet Farm, near Jedburgh, run by Robert and Jacqueline Neill.

AgriScot and QMS are working together to deliver the award which will see the winner receive a £500 cheque.

The winner will also receive a £250 voucher to celebrate their success at a Scotch Beef Club restaurant – the club run by QMS which has around 300 members committed to serving top quality Scotch Beef.

The overall winner will be revealed at AgriScot on November 21st at Ingliston where last year the event attracted more than 9,000 attendees.

Among those who visited the farms to assess them was Brian Turner, one of Britain’s best- known chefs. Mr Turner, who is president of the Academy of Culinary Arts, has worked in some of the most popular restaurants in Europe including Claridge’s, Simpson’s in the Strand and the Savoy Grill.

He joined John Elliot, award co-ordinator, Jim McLaren and Jim Brown during the visits to assess the trio of finalist farms.

“What we saw during our visits to the three farms was a commendable energy and enthusiasm for producing a top-quality product.

“There was a genuine desire to keep looking at ways to improve efficiency and an impressive combination of knowledge, dedication and pride in the job they are doing,” said Mr Turner.

“We are pleased that in its inaugural year the award attracted a diverse range of farm businesses all aiming for excellence in beef cattle production,” said Andrew Moir, AgriScot chair.

“It is important that AgriScot showcases the best in Scottish beef production and these finalists have the business skills and determination to achieve that aim.”

Jim McLaren, chair of Quality Meat Scotland, added: “The three businesses are very different types of units but each shares an unmistakable drive for innovation and efficiency.

“The energy and enthusiasm those involved in the three farms showed us was matched by their commitment to the future and passion for the industry.”

During the visit last week to the three farms, the assessors were looking for evidence of a high standard of technical and financial performance, uptake of new ideas to improve efficiency/profitability, a high level of health and welfare and a keen eye on the market for the end product.

The assessors were also looking for evidence of the passion and enthusiasm by the farmer, and family and staff where relevant, to efficiently produce high quality animals.

All farms producing cattle destined to be used for meat sold under the Scotch Beef label – from breeders through to finishers – were eligible to apply for the new award and accordingly they were also required to be members of Quality Meat Scotland’s farm assurance scheme.