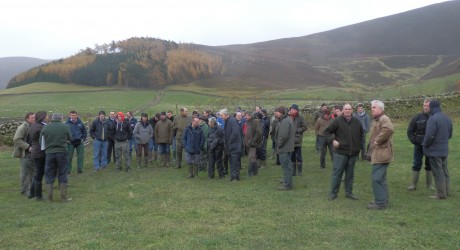 AROUND 50 farmers and interested parties from the surrounding area attended the first meeting of the new Quality Meat Scotland (QMS) monitor farm at Hundleshope near Peebles in the Scottish Borders.

The farmers, of what is the 34th monitor farm to be established in Scotland,  are Ed and Kate Rowell and Kate’s father John who farm the holding on a secure tenancy basis.

Hundleshope Farm is an 1800-acre unit in a Less Favoured Area (LFA) which is mostly hill but includes around 350 acres of flat, inbye and improved grassland.

It is a mixed beef and sheep unit, carrying 70 suckler cows, bred to the Charolais which calve through May and June.

The cows are outwintered on the free-draining inbye land and the calves are fed on home-grown barely and supplement and sold as stores the following spring.

The sheep enterprise is a typical Scottish system with 350 Blackface ewes, which are either bred pure or crossed with the Bluefaced Leicester to produce replacement ewes for the hill, and Scotch mules for the lower ground.

These are in turn tupped by a Texel ram and either sold finished or kept as replacements for the 430 Mule and Texel cross Mule flock.

The cold rain and wind, which accompanied the group on their farm walk, did not dampen the enthusiasm of either the hosts or the visitors as they viewed the inbye fields.

Forty acres of spring barley was grown this year, under sown with Italian Ryegrass.

Big bale silage was also made and a trial of chicory, grown to feed finishing lambs when weaned, proved  successful in its first year. This looks likely to be one of the topics which the group will consider over the three-year term of the monitor farm.

Following the farm walk, facilitators Chris McDonald and Jennifer Brown of SAC Consultancy, a division of SRUC, Scotland’s rural college, split the gathering into groups and asked each to note what they considered to be the main strengths and weaknesses of the new monitor farm.

This proved to be a very useful exercise, with strengths ranging from the enthusiasm and commitment of a family run farm, flat fields and good drainage, to the weaknesses of climate, restriction on expansion and the inevitable reliance on Single Farm Payment (SFP).

Ian MacDougall, technical projects director of QMS, also highlighted the purpose of the monitor farm programme to the gathering.

The aim, he said, was for the farms to act as a catalyst for ideas and an exchange of knowledge and information which would ultimately benefit the whole group and not just the monitor farm itself.

A potential plan for the next three years, which included alternative management systems for cattle and sheep, the use of natural and artificial fertilisers and record keeping, would be considered at the next meeting on December 18th.

The blood test analysis of the cattle and sheep would also be available at this meeting to which new group members will be very welcome.