Media Release: Debut Forth monitor farm meeting attracts a crowd of around 100 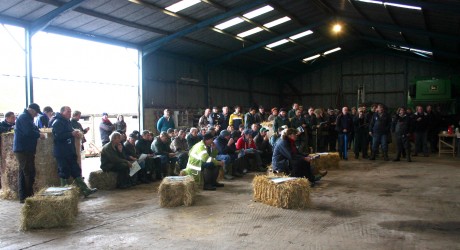 THE first meeting of the new Forth monitor farm generated major interest and attracted around 100 farmers and industry representatives to Arnprior Farm, west of Stirling.

Over the next three years, the McEwen family – Duncan and Anne, their son, Duncan, and his wife, Rebecca – will seek advice and suggestions from the monitor farm community group on a range of topics, including livestock, cropping, soil management and fertility.

The 815 acres (330 has) of Arnprior Farm, which is dissected by the A811, ranges in altitude from 12 feet above sea level on the Carse, to 590 feet on the hill. There is a variety of soil types, including gravel loam, peaty moss and blue clay.

The McEwens run a breeding flock of 570 predominantly Scotch Mules, with some Texel crosses. Texel tups are mainly used but this year a pair of Suffolk tups has been introduced, in the hope finishing some lambs quicker in 2013.

Due to the weather this year the suckler herd of 70, mainly Simmental cross cows, were housed on 6th October. The cows go to Simmental bulls with heifers going to a Limousin. The herd is vaccinated for BVD, IBR and Leptospirosis.

Normally, all progeny from ewes and cows are finished, but this year, as on many British farms, the weather has caused major problems. Lambs are usually finished on aftermaths, with all lambs away before Christmas.

“Not this year!,” explained Duncan McEwen Jnr. “So far we’ve only got 200 away and still have over another 500 at grass. Also we’ve just discovered that we’ve got fluke which are resistant to Triclabendazole, so need to use a different type of drench which we plan to do as soon as possible.”

The bullocks have also been affected by the weather. After weaning they are normally in-wintered at low cost then summered at grass, where in the past they have thrived.

Duncan Jnr told attendees: “They only stayed out for six weeks this year, during which time all they did was ‘plough’ 40 acres of good grass, and gained just 0.55 kgs per day. They are currently at least 100 kgs lighter than they should be.”

Until recently, the cows were artificially inseminated after synchronisation, but bulls are now back in charge of siring duties. One of the projects for the monitor farm community group will be to help the McEwens tighten up their calving to improve ease of herd management.

Weather has reduced this year’s yields in comparison to previous years. “Thanks to the heavy rain of the past two years, the winter wheat yields in particular have been poor, and we’re considering dropping it from the rotation,” explained Duncan Jnr.

Since Duncan junior returned home from college seven years ago, the McEwens have been attempting to gradually lift the pH of their soil, with applications of half a ton of lime per acre.

“In particular, we would like to reduce our bill for purchased fertiliser.”

Consequently, the McEwens utilise all the dung from their own cattle on their land plus some ‘imported’ from a neighbour.

Other than contracted silage wrapping, all work at Arnprior is done by the McEwen family.

At the end of the meeting, Duncan senior admitted not having slept a wink the night before.

However, he said: “I’ve thoroughly enjoyed the day, meeting all the people who’ve been good enough to come, and hearing that we’re not the only ones whose farming is struggling with this miserable weather.”

The next Forth monitor farm meeting will be held in early December.