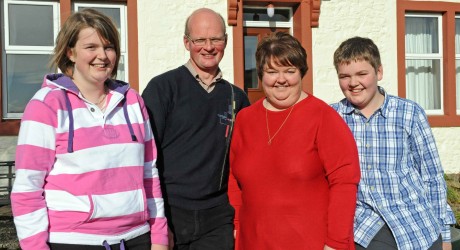 THE appointment of a new monitor farm for Dumfries marks a number of exciting milestones for the monitor farm programme, led by Quality Meat Scotland.

Hartbush Farm, near Amisfield, has today (November 13th 2012) been revealed as the monitor farm for Dumfries. The farm, run by the Paterson family, is the first farm in the Scotland-wide programme to focus primarily on beef finishing. In another first, two processing companies will play an integral part in the project.

John and Amanda Paterson run Hartbush in partnership with John’s parents James and Myrette. In 2016, Hartbush will have been farmed by the Paterson family for 100 years and with the next generation, Louise and Steven, both interested in farming it looks set to remain in the family’s hands for some time to come.

The Patersons run 260 suckler cows and 410 ewes on the farm which is comprised of 606 acres owned land plus an additional 130 acres on a seasonal let basis.

The beef herd is made up of mainly Simmental and Limousin cross cows which go to Charolais, Limousin and Simmental bulls. The majority of the herd – 190 cows – are spring calving with the remainder summer calving, from July. Most of the offspring are finished on the farm although some Simmental heifers are retained as replacements for breeding.

The ewes are Half Breds which go to Suffolk tups and, while most of the ewe lambs are sold for breeding, the remainder of the lambs are sold fat. Winter barley was grown in previous years but due to the wet autumn conditions over the past two years the farm has switched to growing spring barley.

The Patersons employ one full-time member of staff, Colin Rae, who joined the farm 14 years ago after attending Barony Agricultural College. Colin and his wife Sam have a small flock of pedigree Zwartbles sheep they breed and show.

“We are delighted to welcome the Paterson family on board and look forward to working with them over the three year term of the programme,” said Ian MacDougall, technical projects manager, Quality Meat Scotland.

“John and his family have taken a keen interest in the progress of the monitor farm network for several years and their enthusiasm and willingness to try out new ideas make them ideal monitor farmers,” he said.

John Paterson admitted the news that the farm had been selected had initially been a bit unexpected but said the family is very much looking forward to getting going with the project.

“I think we are doing a pretty good job here but it is easy to become blinkered in your own business and there is always scope for improvement.

“We are very keen to make sure we hand over the farm to the next generation in as good a shape as possible and we’re also looking forward to being able to share the findings so that many other farmers can benefit over the next few years,” said Mr Paterson.

One area he is particularly keen to explore is making the best use of electronic tagging in the cattle herd and another is the potential to improve the grassland management on the farm.

Hartbush is the 35th monitor farm to be appointed since the programme got underway and for the first time two meat processing companies will directly support the activities of the farm.

Representatives from AK Stoddarts and Highland Meats will work closely with the monitor farm community group, the group of local farmers and related businesses which will attend meetings and propose management changes to improve the efficiency and productivity of the farm.

Mark Allan, head of Livestock Procurement with Highland Meats, part of the Dawn Meats Group, welcomed the decision to integrate processors into the heart of the project.

“This is a great opportunity for all parts of the beef production chain to work closely to identify opportunities to improve efficiency and quality which should in turn be beneficial for all those involved in the project and the wider industry.”

Matthew Currie and James Worthington of Smiths Gore in Dumfries have been appointed as facilitators for the farm.

The first meeting will be held on December 13th and anyone interested in attending or seeking further information should register by calling Anne McArthur at Smiths Gore on 01387 274381.

MEDIA RELEASE posted by Quality Meat Scotland. You too can post a media release (aka a press release) on allmediascotland.com. For more information, email here.