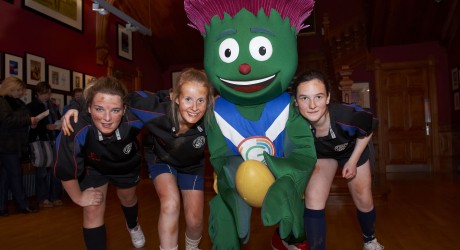 Performers from across the Highlands treated the audience to a showcase of interactive drama, dance and film throughout the entire theatre complex, culminating in a finale performance in the OneTouch Theatre. Special guest, Clyde the thistle, the Commonwealth mascot, also made an appearance delighting young and old alike with his cheeky grin and infectious enthusiasm for the Games.

Audience members were encouraged to guess the sport portrayed in each group’s small show, in return for prizes at the end of the evening. The performance was preceded by a day of public dance and celebration on Sunday, which saw the actors and dancers take to the streets of Inverness with a series of ‘flashmob’ dances.

The show was part of the Games for Scotland programme of events designed to inspire, motivate, engage and engender pride in the people of Scotland in the run-up to the 2014 Commonwealth Games. The programme, managed by EventScotland, forms a key part of the Scottish Government’s commitment to deliver a lasting legacy as a result of the Commonwealth Games coming to Scotland.

“I am very pleased and excited to be supporting EventScotland’s Commonwealth Capers at Eden Court. We have some very dedicated Scottish athletes already in full swing in their preparation for the home Commonwealth games in 2014 and this type of event is exactly the sort of creative endeavour we need to get the country behind them and inspire our young athletes of the future.”

“We are very grateful to those who came to support Commonwealth Capers and make it such an exciting and enjoyable event. The performers really enjoyed interacting with the audience who brought the theatre to life.  We hope that Commonwealth Capers has helped to increase the anticipation for the Commonwealth Games in Glasgow 2014.”

“This year’s impressive Games for Scotland programme highlights the passion and enthusiasm communities across Scotland have for the 2014 Commonwealth Games. Importantly, the programme will give thousands of people the opportunity to be part of the building excitement as we move closer to 2014.

“The wide and diverse nature of the Games for Scotland programme perfectly illustrates there’s more to the 2014 Games than just sport. The Games coming to Scotland provides an exceptional opportunity to make our nation healthier and celebrate our modern and vibrant culture, delivering a legacy Scots can be proud of both now and in the future.”

“With the London 2012 Olympic and Paralympic Games coming to a close, the attention and focus will now turn to Glasgow and Scotland as proud host of the 2014 Commonwealth Games and the excitement is already building across the country. We’re delighted that the Highlands is holding ‘Commonwealth Capers’ as part of the Games for Scotland programme. The programme will provide a fantastic opportunity for people across the country to participate in a number of fascinating events that will celebrate Scotland’s culture, heritage and role as host of the 2014 Commonwealth Games.”

Games for Scotland is a programme of events designed to inspire, motivate, engage and engender pride in the people of Scotland in the run-up to the 2014 Commonwealth Games.

The programme, managed by EventScotland (Scotland’s National Events Agency), forms a key part of the Scottish Government’s commitment to deliver a lasting legacy as a result of the Commonwealth Games coming to Scotland. www.gameslegacyscotland.org

As the London 2012 Olympic and Paralympic Games come to a close, Games for Scotland will celebrate the fact that Scotland is Next, with events inspired by the 17 Commonwealth sports featuring in Glasgow 2014 and by Scotland’s rich cultural and dance heritage.

People across Scotland are being invited to join the excitement in the lead up to 2014 by going along to one of the events taking place between 10 September and 30 November 2012. www.eventscotland.org/gamesforscotland

This year the Games for Scotland programme welcomes the Glasgow 2014 Mascot which will help to generate national, regional, and international awareness of the Glasgow 2014 Commonwealth Games bringing the excitement of the Games to Scotland’s young people and encouraging them to lead an active lifestyle and participate in sport. www.glasgow2014.com.

MEDIA RELEASE posted by Eden Court. You too can post a media release (aka a press release) on allmediascotland.com. For more information, email here.