Media Release: Forces kids in Scotland reveal how they deal with deployment 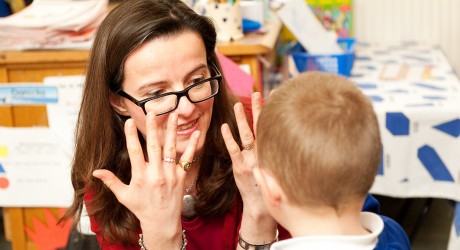 A SHORT film revealing the experiences,  emotions and coping strategies of forces kids living in Scotland dealing with deployment is being premiered in Edinburgh today [15th November 2012].

The 26-minute film, titled ‘Forces Kids – This is my Life’, captures the emotional highs and lows experienced by military children when a parent is deployed to combat zones and how they deal with separation and loss. It also reveals the support that military children give to one another during such times, and highlights the importance of talking over concerns with friends, family and teachers.

The film was commissioned and funded by the Royal Caledonian Education Trust (RCET), a Scottish charity that provides educational grants and support to children of Scots who have served or are serving in the Armed Forces.

Produced by award-winning social enterprise company, Teeny Tiny Films, the film features the real life experiences of over 30 primary and secondary school children in Scotland who have a parent or family members serving in the armed forces.

Royal Caledonian Education Trust chief executive, James MacBain, said: “This film is about ordinary children who face extraordinary challenges from time to time. We learn how they cope with having a parent on deployment for what can be as long as six months, often in areas where there is deep conflict, casualties and unrest.

“The film illustrates the tremendous support and re-assurance that young people give to one another during such testing times, as well as courage and maturity well beyond their years.”

In addition to providing education grants, a core part of the RCET’s remit is providing charitable funds and resources to schools and local authorities in Scotland, to improve educational support for Armed Forces Children and their families particularly prior to, during and after the deployment of a close family member.

RCET education advisor, Carolyn MacLeod, who has been responsible for the Trust’s Education Programme in Scotland, added: “Most children cope very well the majority of the time with the reality of deployment. For some, however, this can lead to challenges in their achievement at school. This film will be used to support the work of the Trust in schools, serving to highlight the benefits of encouraging children to share their thoughts and feelings with their peers and teachers, and to provide reassurance that they are not alone.”

‘Forces Kids – This is My Life’ is being premiered at a red carpet launch taking place at Dynamic Earth today attended by the children who participated in the film and guests and dignitaries from the military, education sector and business community in Scotland.

One of those who knows all about deployment is 18 year-old Carla Grant from Pennicuik in Edinburgh. In 2010, she was preparing for her Advanced Highers when her two brothers and her father were all deployed to Afghanistan with 2SCOTS (2nd Battalion of the Royal Regiment of Scotland). Carla says the weeks and months that followed were very difficult. “Serving your country is part and parcel of being in the military so I should have been more prepared than I was, but I also knew that the risk of being killed or injured in Afghanistan were greater than anything we had had to face as a family up until then. Some days were very difficult for mum and I, and on those days we just hugged a lot.”

Phoebe has been at Ardvreck for nearly three years and spends her school holidays travelling back and forward to Oman where her father serves as a Brigadier in the Defense Section in the British Embassy Muscat. As head girl, Phoebe is a leading role model for her peers, particularly those who have family members serving in the Forces, or like her, have parents stationed overseas. Commenting on how she felt when she was asked to be involved in the making of the film, Phoebe said” “When I was asked to take part I was immediately very excited and a little bit nervous. Most of the time I don’t feel the need to talk about how I feel [about her father being in Oman] but when I do, I speak to my sisters who are older than me. I also help my friends and classmates when they are finding things difficult.”

Issued on behalf of the Royal Caledonian Education Trust by Jen Nash, Panache Communications. For interviews and photography or for further information please call Jen on t. 07971 466 220  jen@panachecommunications.co.uk

INTERVIEWS WITH CHILDREN WHO PARTICIPATED IN THE FILM AND RCET DIRECTORS, AS WELL AS PHOTOGRAPHY FROM THE EVENT IS AVAILABLE BY CONTACTING JEN NASH T. 07971 466 220

About The Royal Caledonian Education Trust

The Royal Caledonian Education Trust (RCET) is an education trust supporting the children of Scots who are serving, or who have served, in the Armed Forces. The RCET provides educational grants to help pay for school clothing, school trips and after school activities where qualifying families have difficulty in funding these themselves. The charity also supports those who want to carry on with their education after leaving school, by providing living expenses for them while in further or higher education, especially where qualifying individuals face real financial challenges that may prevent them from otherwise continuing their education.

RCET runs a very successful Education Programme in Scotland which provides charitable funds and resources to selected schools and local authorities in Scotland to improve support for Armed Services Children and their families particularly prior to, during and post deployment of a close family member.

The charity’s founding fathers were originally members of The Highland Society of London. They decided in 1808 to launch an appeal to raise money for an Asylum to house and educate the many young Scots living rough on the streets of London, having been orphaned by the Napoleonic wars. Eight years later, The Caledonian Asylum as it was then known, was established by Act of Parliament on 14 June 1815.

The first Asylum was opened in December 1819 in Hatton Garden and moved to Islington in 1826. Her Majesty Queen Victoria became Patron in 1852 and the Asylum was renamed the Royal Caledonian Schools. In 1902, a new purpose-built residential school opened in Bushey, Hertfordshire.

After 1948, children continued to board at the school but were educated at local state schools. It is estimated that between 1819 and 1995, approximately 10,000 students spent time at the Schools.

In 1995, the directors decided that the Trust’s objectives could be better met for a modern era as a grant-making body. The Royal Caledonian Education Trust continues to support the educational needs of children of Scots who are serving, or who have served, in the Armed Forces. Her Majesty The Queen is Patron of the charity.

MEDIA RELEASE posted by Panache Communications. You too can post a media release (aka a press release) on allmediascotland.com. For more information, email here.